Ghaziabad To Kanpur In 3 Hours? 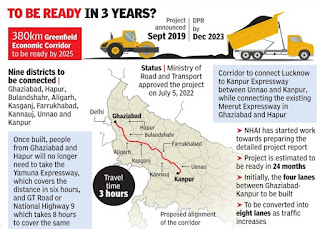 A new road connecting the two industrial hubs of Ghaziabad and Kanpur has been approved by the Centre. Cutting through nine west UP districts, the 380km Greenfield Economic Corridor is expected to bring down travel time between the two cities to just three hours. A drive on the Yamuna Expressway between Ghaziabad and Kanpur now takes six hours.

“It was in September 2019 that Union road transport and highways minister Nitin Gadkari had announced an economic corridor linking Ghaziabad with Kanpur. The idea was to cut travel time between the two industrial cities. On Thursday last week, the ministry gave its approval for the corridor,” said a senior NHAI official.

The project is scheduled to be completed by 2025. “It will be a 380km-long highway, which will initially be four lanes wide. But there are plans to develop the corridor into eight lanes,” the official said.

According to the alignment, the corridor will pass through nine districts — Ghaziabad, Hapur, Bulandshahr, Aligarh, Kasganj, Farrukhabad, Kannauj, Unnao and Kanpur. “As of now, there are now routes connecting Kanpur and Ghaziabad. Commuters driving on the Yamuna Expressway take around six hours, while those travelling on NH-9 need at least eight hours. So, you see how the new corridor will be beneficial for commuters. It will cut down the travel time to just three hours,” the official said.

A survey is currently being conducted to identify land for the project. Work on the DPR has started too,sources in the NHAI said, and it is likely to be ready in about a year. “Land acquisition will start then and is expected to be completed by 2023. From there, it will take two years for the project to be ready,”the NHAI official added.

According to the plan, the four-lane corridor will initially be expanded to six at culverts and underpasses. Land will be set aside for it to be widened to eight lanes in the future.

The corridor will also prove to be a boon for industries by cutting down the time and cost of travel.