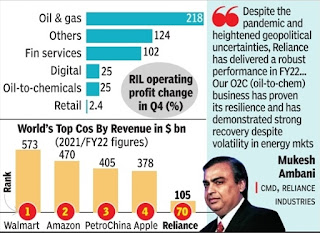 Reliance Industries’s revenue has crossed $100 billion in fiscal 2022, becoming the first Indian company to reach the milestone. The Tata Group, a collection of over 30 companies across 10 verticals, had a revenue of $103 billion in fiscal 2021. The group’s fiscal 2022 numbers are yet to be declared. On Friday, Reliance said its FY22 revenue rose 47% to Rs 7.9 lakh crore ($105 billion) helped by strong growth in its oil-to-chemicals and consumer (Jio & retail) businesses. Profit grew 26% to Rs 67,845 crore ($9 billion), retaining the top position as India’s most profitable private company. Operating profit, a yardstick for underlying business performance, increased 34% to Rs 1.2 lakh crore.

“Despite the ongoing challenges of the pandemic and heightened geopolitical uncertainties, Reliance has delivered a robust performance in FY2021-22,” said chairman and managing director Mukesh Ambani. Though Reliance has launched new businesses over the years in retail, telecom and recently green energy, its O2C unit continues to account for the bulk of its revenue. “The gradual opening up of economies . . . sustained high utilisation rates across sites and improvement in transportation fuel margins and volumes have bolstered our O2C earnings,” Ambani added.

For the January to March quarter of fiscal 2022, Reliance’s profit grew 20% to Rs 18,021 crore on the back of higher margins from its O2C and Jio units. Revenue amounted to Rs 2.1 lakh crore, up 37%. Operating profit edged up 30% to Rs 33,493 crore in Q4FY22, aided by better price realisations. Operating profit of O2C grew 25% to Rs 14,241 crore, led by high transportation fuel cracks, partially offset by lower polymer and intermediates margins and higher energy cost. Downstream product margins were impacted by weak naphtha cracking economics and supply overhang in fibre intermediates, the company said in a statement.

Operating profit of digital (Jio) too climbed 25% to Rs 11,209 crore due to strong revenue growth and margin improvement. Jio’s average revenue per user — a key metric that influences income — was at Rs 168 in Q4FY22, up 21%.

ARPU is the total revenue of the telecom operator divided by the number of users on its network.

Launched in 2016, Jio has 410 million customers as of March 31 this year and saw data and voice traffic growth of 48% and 17% on its network. Operating profit of the retail business slightly grew 2% to Rs 3,712 crore. The retail segment does not include RIL’s petro-retailing venture. This business is housed in a joint venture with UK’s BP. Operating profit of financial services increased 102% to Rs 172 crore, while that of oil & gas rose 218% to Rs 1,556 crore. RIL’s gross debt at the end of Q4FY22 was Rs 2. 66 lakh crore. And, it had about Rs 2. 31 lakh crore in cash and cash equivalents.