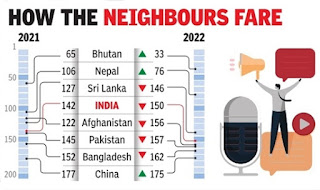 India has fallen eight places from 142 to 150 in the 2022 World Press Freedom Index of 180  countries. The index published by Reporters Without Borders, points to an overall two-fold increase in media polarisation creating divisions within countries, and between countries at the international level.

India’s ranking, according to the report, fell on the back of increased “violence against journalists” and a “politically partisan media”, which has landed press freedom in a state of “crisis” in the world’s largest democracy.

India’s decline in press freedom is synonymous with many nations in the Asia-Pacific region, affected in the most part by two crucial events — the military coup in Myanmar in 2021 which led to an “extremely harsh repression of journalists”, which saw the country’s ranking fall to 176 of 180, and the Taliban’s seizure of power in Afghanistan, which worsened conditions for reporters and news organisations and made them targets of intimidation and targeted violence.

The index says, media in India, among nations reputed to be more democratic, faces pressure from “increasingly authoritarian and/or nationalist governments”, a transformation seen since Prime Minister Narendra Modi took over the reins of the country in 2014.

“Very early on, Modi took a critical stance vis-à-vis journalists, seeing them as ‘intermediaries’ polluting the direct relationship between himself and his supporters. Indian journalists who are too critical of the government are subjected to all-out harassment and attack campaigns by Modi devotees known as ‘bhakts’,” the report says.

It also faults India for its policy framework, which is protective in theory but resorts to using charges of defamation, sedition, contempt of court and endangering national security against journalists critical of the government, branding them as “anti-national. ”

With an average of three or four journalists killed in connection with their work every year (one killed since January 2022 and 13 currently in prison), India, according to the report, is also one of the world’s most dangerous countries for media persons. “Journalists are exposed to all kinds of physical violence including police violence, ambushes by political activists, and deadly reprisals by criminal groups or corrupt local officials,” it said. The World Press Freedom Index also says that the situation in Kashmir remains “worrisome” and reporters are often harassed by police and paramilitaries, with some being subjected to so-called “provisional” detention for several years.

A joint statement by the Press Club of India, Press Association and the Indian Women’s Press Corps, said attacks on media grew in “myriad ways”.