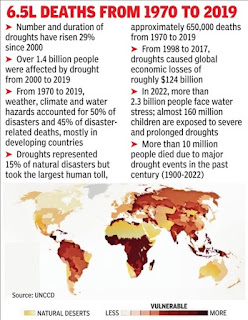 The number and duration of droughts has risen 29% globally since 2000 and the effect of severe droughts is estimated to have reduced India’s gross domestic product by 2-5% over the 20 years from 1998 to 2017, said a new report from the United Nations Convention to Combat Desertification released on Wednesday.

While calling for multiple actions including land restoration to reduce the risk, the report released on the sidelines of the ongoing 15th session of the UNCCD conference at Abidjan, Côte d’Ivoire, also flagged that the droughts represent 15% of natural disasters globally but took the largest human toll— approximately 650,000 deaths in 50 years (1970-2019). Globally, droughts caused economic losses of roughly $124 billion during that period.

Though severe drought affected Africa more than any other continent with over 300 events recorded in the past 100 years, accounting for 44% of the global total, the highest total number of humans affected by drought were in Asia. “We are at a crossroads when it comes to managing drought. We need to steer toward the solutions rather than continuing with destructive actions, believing that marginal change can heal systemic failure,” said Ibrahim Thiaw, executive secretary of the UNCCD while calling for making a full global commitment to drought preparedness and resilience in all regions a top priority. He said, “One of the best, most comprehensive solutions is land restoration, which addresses many of the underlying factors of degraded water cycles and the loss of soil fertility.

“We must build and rebuild our landscapes better, mimicking nature wherever possible and creating functional ecological systems. ” The report on drought comes in the backdrop of the UNCCD’s earlier report on ‘global land outlook’ that flagged in April how up to 40% of all ice-free land is already degraded globally, with dire consequences for climate, biodiversity and livelihoods, affecting 50% of humanity. It also noted that the current scale of degradation threatens roughly half of global GDP (US$44 trillion).

The COP15 is being held to focus on restoration of 1 billion hectares of degraded land between now and 2030, and tackling escalating droughts, sand and dust storms, wildfires and other disaster risks.