Construction of wider NHs up by 300% in 7 years 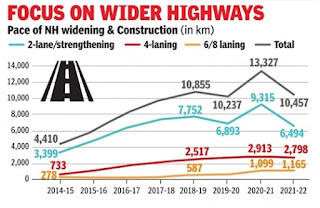 This is set to increase further as the agencies under the road transport and highways ministry, particularly, NHAI, are now more focused on construction of economic corridors and expressways, officials said.

The lane-wise highway construction data shows that while the construction and widening of NHs to four-lane has been steady since 2017-18, the construction of six and eight lane highways has witnessed a quantum jump in the past two years. While in 2019-20, only 616 km NH stretches were developed as six and eight lane highways, this annual increase touched 1,165 km in 2021-22. An official said though building wider highways is the need of the hour, the government is equally focused to provide some NH connectivity to areas where traffic is lesser. “So, we are also widening single-lane highways to two lanes with paved shoulder and are also strengthening the existing stretches. In many areas, two lane highways also meet the local requirement and accelerate economic activities,” said a highway ministry official.

Another official said the achievement in four lane and above category will touch a record by 2026-27 when most of the 22 expressway and economic corridor projects with cumulative length of 5,600 km gets completed. Even the next phase of the government’s flagship highway development programme, Bharatmala-II comprising 8,500 km, will be mostly “Greenfield corridors”, meaning these will be of at least four lanes. The government is likely to approve this Rs 3.5 lakh crore NHAI officials said the focus on wider highways is primarily aimed at faster movement of goods and to reduce the cost of logistics.