India, Germany to work on projects in third countries 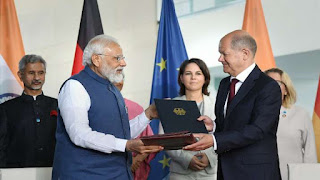 India and Germany signed nine agreements, including one at the level of the leaders for green and sustainable development. PM Narendra Modi called it an article of faith for India as German Chancellor Scholz committed 10 billion euros to support India’s green growth plans.

The pacts included a joint declaration of intent for working together on development projects in third countries.

As expected, Scholz invited Modi for the G7 summit next month. Modi also reiterated commitment to an FTA with EU. Both sides stressed the significance of a free, open and inclusive Indo-Pacific and underlined the importance of unimpeded commerce and freedom of navigation in accordance with international law, including in South China Sea.

After chairing the sixth India-Germany inter-governmental consultations with Scholz, Modi said that peace and stability was in a fragile state and that India had called for an end to the war in Ukraine and said from the very beginning that dialogue is the only solution. “We believe nobody is going to win this war. All will suffer losses,” said Modi, adding India favours peace as it is very worried about the humanitarian impact of the crisis.

“Because of the turmoil, oil prices have skyrocketed. The world is facing a scarcity of foodgrains and fertilisers. Every family in the world is feeling the pain but the impact will be worse on poor and developing countries. We have sent humanitarian assistance to Ukraine and are also helping friendly countries with grain export, oil supply and financial assistance,” said Modi, who is on a much-anticipated 3-day visit to Europe, which remains in ferment because of Russia’s actions in Ukraine.

With its attack on Ukraine, Russia has called into question fundamental principles of international law, Scholz said in his press statement, and that “it is all the more important to emphasize the importance of a rule based order in the world, especially with a view to other regions of the world such as the Indo-Pacific region”. He said Germany is just as united with India here as it is “in defending the rule of law and democracy worldwide”.

The two leaders strongly condemned terrorism in all its forms and manifestations, including any use of terrorist proxies and “crossborder terrorism”. The mention of cross-border terrorism is significant for India in the context of Pakistan.

“They called upon all countries to work towards rooting out terrorist safe havens and infrastructure, disrupting terrorist networks and financing in accordance with international law, including international humanitarian law. They further called for concerted action against all terrorist groups, including groups proscribed by the United Nations Security Council 1267 Sanctions Committee,’’ said the statement, adding both sides agreed to begin negotiations for an agreement on exchange of classified information.