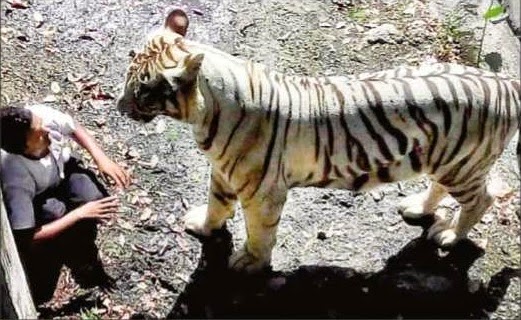 It was a horrific sequence of events that left visitors to Delhi zoo stunned. One among them, 20-year-old Maqsood, scaled a low iron railing and a moat wall with an incline to fall right into the tiger enclosure. Within 10 minutes ­ before the guards could summon any help ­ the tiger grabbed him by the neck and dragged him away . He probably died within a few minutes. His lifeless form was then dragged around for some time before the tiger lost interest.
The tragedy , which shook people across the country, left a trail of questions. The youth was a dropout and suffered from some mental ailment. A guard had reportedly warned this factory worker twice when he crossed the railing and was leaning over the wall. He tumbled over at 1 pm, plunging about 15 feet. But could the gory incident have been avoided? Did the zoo staff do enough to deter or prevent him from rushing to his death? Wasn't the 10-minute window long enough for the zoo to mount a rescue operation? Why weren't the guards carrying a tranquilizer gun? The tiger, seven-year-old Vijay , looked at him with curiosity for about five minutes from a sniffing distance, according to witnesses.The 50-odd visitors in front of the enclosure created a din by clapping and shouting, some of them trying to scare away the animal by throwing sticks and stones. Far from being deterred, the tiger first pawed Maqsood a few times and then lunged at him, caught him by the neck and dragged him to the other end of the enclosure.
No one knew how Maqsood fell into the moat but noticed him when he started calling for help.
The guard posted at the enclosure, Praveen, reportedly made calls to officials from his wireless set as soon as Maqsood fell into the moat. But it took the zoo officials about 15 minutes to reach the enclosure, said witnesses. By that time, it was all over.