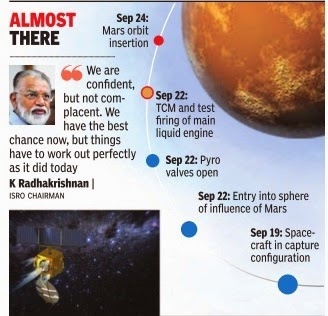 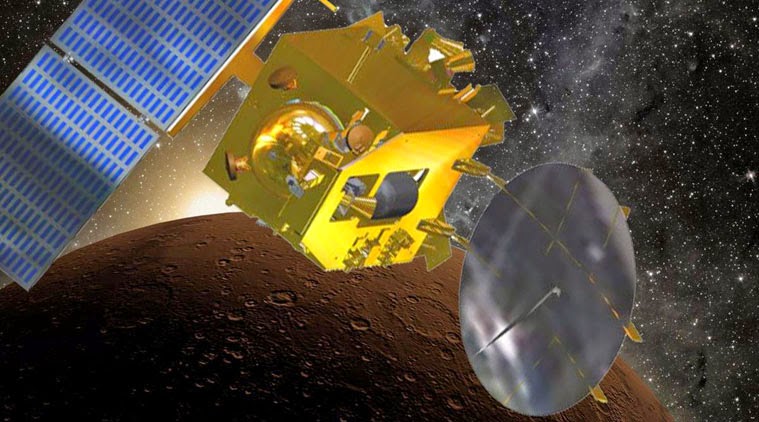 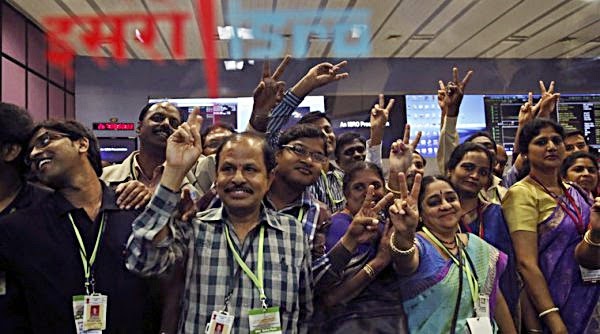 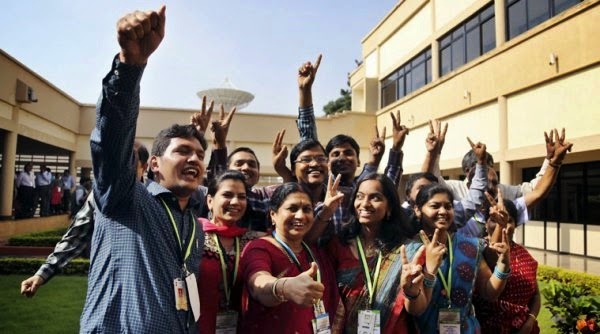 The Indian Space Research Organisation’s Mars Orbiter Spacecraft successfully entered the orbit of Mars on Wednesday morning after a liquid motor engine fired effectively for a little over 24 minutes to impart a little over the required velocity of 1098 metres per second at 1099 metres per sec. The $ 71 million mission, one of the cheapest undertaken by any space faring nation, puts ISRO among an elite league of three other space agencies to undertake a successful voyage to the Red Planet. The successful entry of the MOS into the orbit of Mars (further data is still awaited on the exact orbit achieved) makes India the first country to make it to Mars on its first attempt.
The Mars Orbiter Spacecraft was intended to be placed in an elliptical orbit spanning 423 km X 80,000 km around Mars. The US space agency NASA which has 16 successful Mars mission to its credit placed its Maven spacecraft in 150 km X 6250 km orbit around Mars exactly two days ago.
The successful mission of the Mars Orbiter Spacecraft with Prime Minister Narendra Modi in attendance was greeted by cheers by scientists at ISRO’s mission operations centre 2 and was followed by the distribution of sweets.
The Mars Orbit Insertion maneuver on Wednesday went to plan for ISRO with the Mars Orbiter Spacecraft triggering pre-loaded commands on the dot as prescribed by the pre-determined schedule. There were loud cheers in mission control when the liquid engine started firing at 7.17 AM and information was received in this regard at the earth stations at 7.30 AM.
The biggest cheers in mission control however emerged at 8.10 AM when first information came in from the spacecraft to indicate that the orbit insertion had gone to plan with the engine imparting the required thrust of 1098 metres/second during its 24 minute burst.
With Mars eclipsing the MOS for a period of nearly 20 minutes from 7.34 AM the major portion of the maneuver on Wednesday occurred with communication being shut down with MOS and with no solar power supply to the spacecraft. The orbiter functioned on its internal battery power till 8 AM before resuming communications and power supply at the end of the eclipse.
The maneuver on Wednesday involved reducing the velocity of the MOS and putting it in synch with the velocity of Mars. “When we reach Mars our spacecraft will have a velocity of 22.57 km/sec where as Mars velocity is 25.71 so our space craft is slow. But when it is coming under the influence of Mars gravity it gains a velocity of 5.7 km/sec but we don’t want that much velocity to put our spacecraft in the desired orbit. What we require is 4.6 km/sec.  So from 5.7 km/second the velocity has to be reduced to 4.6 km/sec so the velocity increment imparted is 1.1 km/sec,’’ the mission director at mission control Dr V Kesava Raju said. 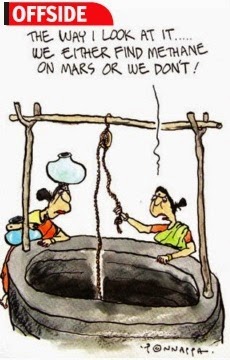