Amma barred from being CM or MLA for 10 yrs 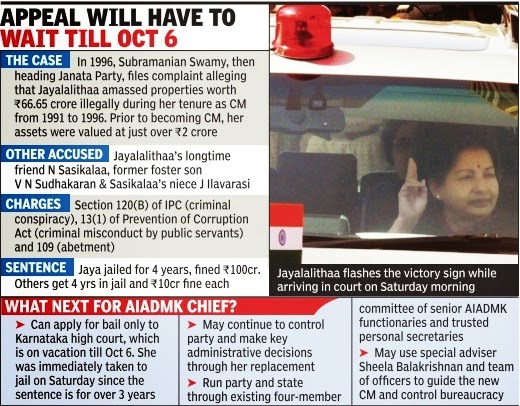 Four years in jail. Rs 100 crore as fine. Confiscation of all seized properties. Immediate imprisonment, and no private medical treatment. This is the crux of special judge John Michael D'Cunha's verdict in the Rs.66.65-crore disproportionate assets case against Tamil Nadu chief minister J Jayalalithaa. The immediate consequence of Saturday's shocker is that Jayalalithaa ceases to be both MLA and CM.
The conviction may push Jayalalithaa's party into a tighter embrace with the central government as AIADMK will now have to fight off rival DMK which, no doubt, will be enthused by the court's order. AIADMK has 37 MPs in the Lok Sabha and 11 in the Rajya Sabha. For BJP, such a development would be helpful, especially after its split with Shiv Sena, which has 18 MPs in the Lower House and three in the Upper House.
This is the first time anyone has been convicted while being a CM. However, this is the third time Jayalalithaa, 66, has been convicted in a corruption case, and the second time she has been forced to step down as CM. Her two earlier convictions-on February 2, 2000 and October 9, 2000-came when she was not in power. Both those convictions were overturned. The case she is now convicted in deals with offences such as abuse of office and amassing of wealth during her first term as CM. It has dragged on for nearly 18 years.
Three of Jayalalithaa's aides and co-accused--N Sasikalaa, V N Sudhakaran, J Elavarasi--were also awarded four years in jail. They were fined Rs.10 crore each.
As details of the ruling trickled out, violence broke out across TN with AIADMK cadres forcing businesses to down their shutters, torching buses and blocking roads.
Several former and serving chief ministers have been imprisoned for political reasons and a handful of former CMs for corruption, but J Jayalalithaa is the first CM in office to go to jail for amassing illegal wealth.Former CMs who have been jailed for graft are Lalu Prasad, Madhu Koda, B S Yeddyurappa, O P Chautala and Jagannath Mishra.
The prosecution scored a perfect 10 of sorts as it got all the four convicted on all the three charges against them. While Jayalalithaa was convicted under provisions of Section 13 of the Prevention of Corruption Act (criminal misconduct by public servants), the other three were guilty of Sections 109 (abetment) and 120(B) (criminal conspiracy) of IPC, special public prosecutor Bhavani Singh said.
Singh and his assistant M S Maradi said the prosecution had proved its case and law had taken its course. Maradi said, “Since the sentence is four years, she has to move the high court by way of a criminal appeal for getting bail“. As sporadic violence broke out across Tamil Nadu, officials briefed governor K Rosaiah, who expressed concern over the situation. 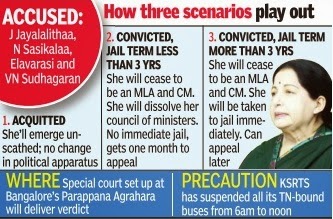 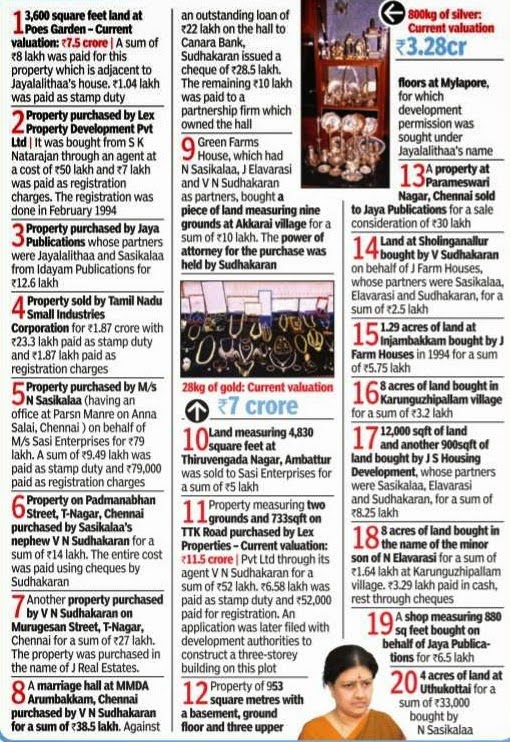 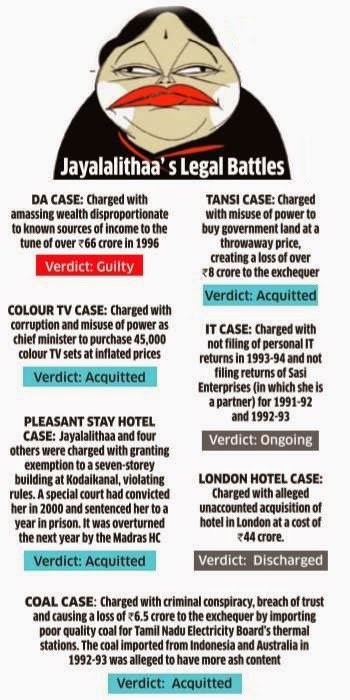