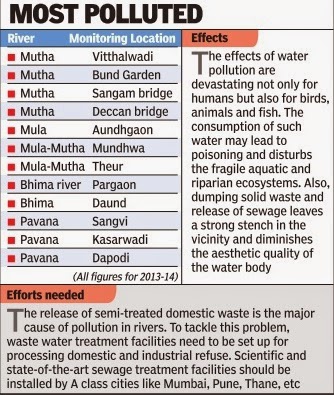 Rivers flowing in Pune district have now earned the dubious distinction of being the most polluted in Maharashtra. A recent report on water quality has found Bhima upper sub basin in the district, which has Mutha, Pavana, Indrayani and Bhima rivers, as the most polluted in Maharashtra. It has put the water quality of these rivers in the `bad to very bad' category.
Water flowing in 18 more rivers in Pune, Solapur and Satara too has been branded as `bad'. The survey has also found that the filth load on these water bodies has remained unchecked for years.
The survey was carried out by the Maharashtra Pollution Control Board (MPCB) in association with The Energy and Resources Institute (TERI). It found that almost half of the water quality stations recorded poor quality and also found samples from the basin affected with sewage discharge and fecal coliform. Just about 15% of the total observations recorded good to excellent water quality . Worse, high fluoride content was detected in the groundwater in Pune, Aurangabad, Solapur and Kolhapur.
The survey has found water in 18 of 46 rivers, which come under the Pune regional office covering Pune, Satara and Solapur districts, as `bad to very bad' quality in 2013-14.Five of the six borewells or dugwells in the district too recorded poor to very poor ground water quality in 2013-14.
A total of 17 water quality monitoring stations or WQMS located in the Bhima upper sub basin and the west flowing river basin, recorded a high level of pollution in the peak summer and winter months.“These basins have the most urbanised regions of the state.The water quality monitoring stations representing surface water quality for Bhima, Mula, Mutha, Nira and Pavana rivers in the Bhima upper-sub basin also recorded heavy pollution loads throughout the year. Water in Pavana river was found to be heavily polluted in the villages of Pimprigaon, Kasarwadi and Sagavigaon of Haveli taluka, Pune district. These areas need further investigation and an appropriate action plan to substantially control the water pollution,“ the report said. A study conducted by the MPCB and TERI termed the quality of river water flowing through Pune district as ‘worst’. However, the situation is much better in Satara, Sangli and other neighbouring districts where the water quality ranges from ‘medium to excellent’.
As per the intra basin performance of Krishna basin across five districts of the state, namely Kolhapur, Pune, Sangli, Satara and Solapur, the annual average water quality index of 28 water quality monitoring stations of Pune was consistently in bad category (in the range of 38-50) from 2007-08 till 2013-14. Whereas, annual average water quality index of Satara and Solapur was medium to good (in the range of 50-63) and that of Kolhapur and Sangli was in the good to excellent category (in the range of 63-100).
Upon analysing the interbasin performance for the quality of surface water in Maharashtra, the survey found that the Bhima-upper sub-basin (in Pune regional office) has the most severely polluted river basin in the whole state. Almost half of the observations across all the monitoring stations recorded the quality of water as ‘bad’ or ‘bad to very bad’ on the index. In this sub-basin, merely 10 to 15% of the observations recorded the quality of water in the category ‘good to excellent’.
The basin comprises Indrayani, Mutha, Bhima and Pavana rivers, which are severely affected with domestic sewage discharge since high annual average fecal coliform levels were recorded in the rivers of this basin.
In Maharashtra, of the five river basin systems, 55% of the required water is sourced from the four river basins namely Krishna, Godavari, Tapi and Narmada, which lie to the east of the Western Ghats, while 45% of state's water resources emanate from Western Ghats and are known as west flowing rivers. Given the pressure from urbanization and industrialization, there is a dire need to monitor and regulate water pollution in state, the report said.
The Krishna basin in the state could be divided into three sub-basins, ‘Bhima upper’ and ‘lower basin’ and ‘Krishna upper’. There are a total of 54 (36 on Bhima upper and 18 on Krishna upper) surface water monitoring stations in the Krishna river basin in Maharashtra. There is no monitoring station on Bhima lower sub-basin.
The intra basin performance of Godavari across eight districts of the state showed that among eight districts, namely Aurangabad, Beed, Jalna, Latur, Nanded, Nashik, Osmanabad and Parbhani, the annual average water quality index of all the districts were in good to medium range (i.e. WQI in range of 63-100) from 2007-08 till 2013-14.