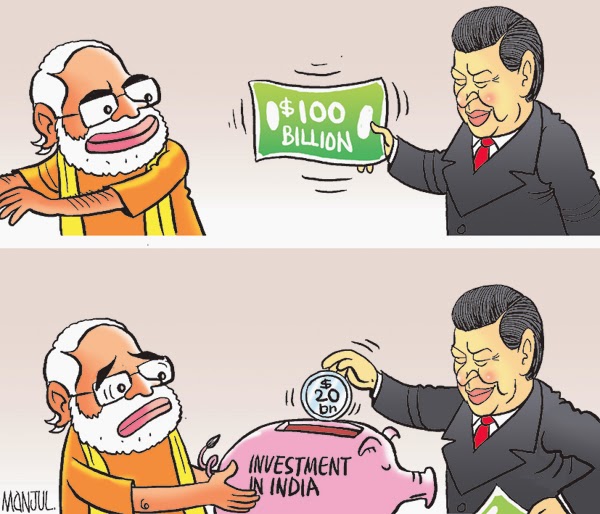 China will invest US $20 billion in India in the next five years in industrial and infrastructure development projects, the government announced on Thursday after a meeting between PM Narendra Modi and President Xi Jinping. In addition – while the amount is considerably less than $35 billion Japan has pledged – Beijing will set up two industrial parks in Maharashtra and Gujarat as per the understanding. There was speculation in the media that the Chinese would announce investments worth $100 billion in India.
Chinese investments will “open a new chapter in our economic relations”, PM Modi later said. He addressed the trade imbalance issue with China, urging Xi to improve market access and investment opportunities for Indian companies. “We agreed that our economic relations don’t do justice to our potential. I expressed concern at the slowdown of trade and the worsening trade imbalance,” the PM said. “I’ve invited Chinese investments in India’s infrastructure and manufacturing and spoke about our new policies and administrative steps in these areas,” said Modi. Xi assured Modi of steps to allow more market access to Indian products, including pharmaceuticals.
“We should move towards peaceful, cooperative and inclusive development. It’s important that we strengthen exchanges at all levels. The world listens when India and China speak in one voice,” he said. “The need for measures to rebalance bilateral trade and address the existing structural imbalance in trade that has a bearing on its sustainability was discussed. The talks focused on pharmaceutical supervision, including registration, need for speedier phytosanitary negotiations on agro-products for two-way trade, stronger links between Indian IT companies and Chinese enterprises, and increasing services trade in tourism, films, healthcare, IT and logistics,” an official said.
The two countries have been looking at the possibility of signing a civil nuclear cooperation agreement for a few years. Such a deal would boost energy security cooperation between India and China and discussions would begin soon, Modi said.
The PM thanked Xi for opening a new route through Nathu La to Kailash Mansarovar. This will be in addition to the existing one through Uttarakhand. The new route makes Kailash Mansarovar accessible by road, which will help older pilgrims. It offers a safer alternative in the rainy season, makes the pilgrimage shorter, and enables a much higher number of pilgrims to go there, Modi said.