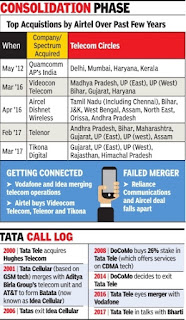 The Tata Group has agreed to sell its mobile business to Bharti Airtel for free, ending the salt-to-software conglomerate's long-standing attempts to rid itself of this loss making venture while bolstering the market share and 4G airwaves capacity of the Sunil Mittal-led company .
The deal, which has been done on a `debt-free, cash-free basis' will intensify the consolidation process underway in the telecom industry, which has now come to be dominated by three players -the Idea-Vodafone combine, Bharti Airtel and Reliance Jio. Once the Idea-Vodafone merger is closed, Airtel will slip to the No. 2 position in the Indian market, and the acquisition of Tata Teleservices' wireless operations will help it to narrow the gap with the merged entity.

N Chandrasekaran, chairman, Tata Sons, said, that the deal was the best possible for the Tata Group and its stakeholders. “Finding the right home for our longstanding customers and our employees has been the priority for us,“ said.

Under the contours of the present deal, Tata Teleservices' wireless operations -consumer mobile business -with over 40 million mobile subscribers, majority of 5,000 employees, and around 178.5 MHz of airwaves -nearly 40% of which are 4G ready -spread across 19 circles will be transferred to Bharti Airtel on a cash-free, debt-free basis. Tata Teleservices also runs enterprise and fixed line & broadband businesses.

A person familiar with the matter said that Bharti Airtel will take care of roughly Rs.1,500-2,000 crore of the Rs.10,000 crore airwaves auction payments that Tata Teleservices needs to make to the government over the next few years.

Tata's wireless operations will continue as usual until the completion of the deal, which will also see Bharti Airtel getting the right to use part of the existing fibre backbone network of Tata Teleservices. Besides, the Tatas will retain their stake in tower company Viom Networks, and will take care of the liabilities associated with it, the two companies said.

The employees of Tata Teleservices are being separated on the lines of the two businesses -consumer on one side and enterprise & fixedline and broadband on the other.

For the 53-year-old Chandrasekaran, the deal with Bharti marks the second significant restructuring of the group portfolio since he assumed office earlier this year. Last month, Tata Steel and German steelmaker Thyssenkrupp AG, agreed to merge their European businesses to become the second-largest steelmaker of the continent.

Brokerages have turned positive on Bharti Airtel and upgraded their stance from sell to buy as the acquisition of Tata Tele's wireless business is expected to boost the Sunil Mittal-led telco's overall cost position and spectrum portfolio and help defend its margins and cashflows against Reliance Jio.

The Tata Tele deal, close on the heels of Airtel's buyout of Telenor India and an earlier spectrum trading deal with Aircel, will allow India's top phone company to make it difficult for Jio to continue with its disruptive pricing.

Analysts also expect the Tata deal to allow Airtel to defer any major spectrum purchases for a few years and accelerate its ability to migrate the present three-layer mobile network to pure 4G without disrupting the 2G business. This is despite Tata Tele's spectrum coming up for renewal in five-six years.

The Airtel-Tata Tele deal is slated to close in a year with some insiders suggesting this could happen even sooner.