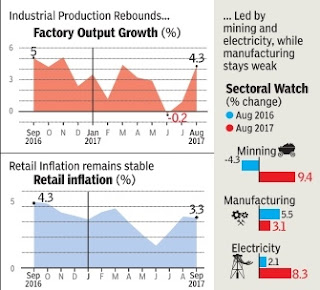 The government had twin cause for cheer with industrial growth picking up pace to a nine-month high in August and consumer inflation remaining steady in September, exceeding expectations and raising hope the economy is set for a revival after slumping to a three-year low in the June quarter.
The IIP rose 4.3% in August, reversing a contraction in June and faster than a 0.9% rise in July. Inflation based on the CPI was at 3.28% in September, unchanged from August. The expectation had been for inflation of 3.5% and industrial growth of around 2.5%. The numbers will buoy the government, which has been at the receiving end of a spate of criticism for its economic management after growth fell to 5.7% in the April-June period, triggering a raft of downgrades in FY18 growth estimates by multilateral institutions, the Reserve Bank of India and brokerages.

Experts welcomed the signs of recovery but want to watch the data for a few months before calling a turnaround.

Advance indicators such as car sales and the purchasing managers' indices for September have also been buoyant, suggesting some strength ahead of the festival season.

The government has maintained that the economy bottomed out in the April-June quarter and that it will revive, a view endorsed by RBI that last week pared GVA growth to 6.7% from 7.3% estimated earlier. It said GVA growth will rise to 7.7% in the March quarter. The IMF had on October 10 cut India's growth forecast for FY18 to 6.7% from 7.2% estimated earlier, attributing the slowdown to GST, implemented on July 1, and demonetisation.

The industrial recovery in August was boosted by electricity (8.3%) and mining (9.4%), while manufacturing grew 3.1%. Capital goods production, an indicator of investment activity, was up 5.4% in August while a 6.9% rise in output of consumer non-durables or FMCG indicated strength in the rural economy. Consumer durables, which has a more urban consumption bias, were up a modest 1.6% in August.

The data suggests manufacturing and demand are returning to normal after the disruption caused by the GST rollout, though not as strongly as anticipated.

Thirteen out of the 23 sub-sectors of manufacturing with a weight of 27.0% in the IIP recorded a contraction in August 2017.

However, most independent economists ruled out the possibility of a rate cut in December when the RBI governorled Monetary Policy Committee meets to review key policy rates.

The MPC kept rates unchanged at its last meeting earlier this month.

The staggered impact on the housing index of the CPI due to the increase in the HRA of central government employees is likely to push up housing inflation further over the coming year.