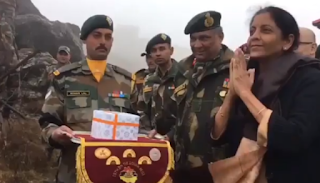 A state-run Chinese newspaper has lauded defence minister Nirmala Sitharaman's friendly gesture towards Chinese soldiers during her recent visit to Nathu La border pass by describing it “as the most warm-hearted scene at the Sino-Indian border area since the Doklam standoff“.

“Sitharaman's visit to the border regions as defence minister can be easily interpreted as New Delhi's push to intensify combat readiness against Beijing. But Sitharaman's traditional Namaste greeting to the Chinese soldiers sent another signal to the public that might not erase the first impression but may at least balance things out,“ Global Times wrote in an editorial titled `Sitharaman greeting sends warm signal'.

The editorial, which comes in the backdrop of recent reports of large deployment of troops by China near Dokalam, further said, “Being on guard against China is a widespread mindset in Indian society . But confrontation with Beijing is also a radical idea beyond its national strength and contradicts its fundamental interests.Such an idea is only advocated by extreme nationalists. Indian public opinion is inquisitorial on any hard-line Beijing policy by the Indian government and foresees a `second round of Sino-Indian face-offs', constantly pressuring New Delhi's diplomacy after the Dokalam standoff.“

Sitharaman's greeting to the Chinese soldiers conveys her hope for peace on the Sino-Indian border and unwillingness to see a new standoff, the Global Times said, softening its tone from the earlier editorials which advocated war during the Dokalam standoff during July-August. China welcomes Sitharaman's greeting and hopes this friendly gesture is also welcomed by Indians, the editorial said. It said Sitharaman's charm offensive might help break the ice between Chinese and Indian public opinion.

“This is a realistic and responsible attitude for the country and its people. Both before and after the Dokalam crisis, the Chinese government hopes for border peace with the broad support of the Chinese people. But Indian society's understanding of their country's border policy seems ambiguous and chaotic.Some Indians believe New Delhi will take tough measures to crush Beijing's will,“ the Chinese publication said.

Global Times, widely regarded as the Chinese government's mouthpiece for external outreach, said, “New Delhi has been strengthening its military presence at the Sino-Indian border in recent years... India isn't a major focus for China's international strategy. India's development lags behind China. Its modernisation and development does not depend on winning the initiative in its relations with China. Friendly cooperation is the best option, strategic exhaustion the worst. Both countries should control the risks.“

Seeking to caution India against forming alliances with US and Japan, the editorial said, “Indians must overcome the paranoia that suggests their country is strategically thwarted and threatened by Beijing.“