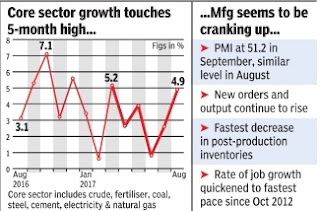 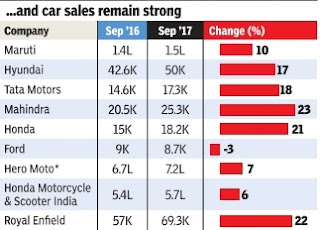 Core sector growth rose to a five-month high in August, car sales remained robust on the back of festival demand, while the manufacturing sector showed signs of reviving in September from the impact of the GST, triggering hopes for the sluggish industrial sector and the overall economy .
Data showed eight core sectors -coal, crude oil, refinery products, natural gas, fertilizers, steel, cement and electricity -grew an annual 4.9% in August, higher than 3.1% expansion in August 2016 and 2.6% growth in July .

The core sector accounts for 40.3% of the index of industrial production and any improvement in growth augurs well for the overall industrial production. The rebound in August was led by a surge in coal and electricity output, while some sectors such as steel and cement remained sluggish.

Car sales also shot up in September on festive fervour as dealers stocked up ahead of Navratras and Diwali. Volumes were healthy for almost all manufacturers, except for Ford. But companies said the “going may be tough“ in the coming months as the market may have already got saturated due to “early purchases“ on account of fear of price hikes due to GST rate changes.

Maruti Suzuki registered a10% growth in volumes and has been going strong on demand for models such as Brezza mini SUV , Baleno hatch and Dzire entry sedan.

Hyundai's domestic volumes crossed the 50,000 mark, registering nearly 17% growth over the 42,605 units it sold in the same month last year. Tata Motors continued its comeback with an 18% growth in September volumes. Economists said the string of strong data augured well for the industrial sector.

The spate of healthy numbers come against the backdrop of the debate on health of the economy which slowed to a three-year low of 5.7% in the April-June quarter, prompting calls for measures to revive growth.