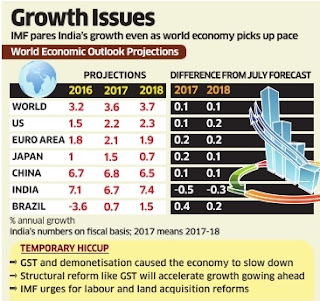 The International Monetary Fund has pared India's growth forecast for FY18, citing the lingering impact of demonetisation and disruption caused by the GST but expects a revival as structural reforms bear fruit.That will help India win back the title of fastest-growing economy from China.
The Indian economy will grow 6.7% in FY18 against 7.2% estimated earlier, according to the latest edition of the IMF's flagship World Economic Outlook. FY19 growth is pegged at 7.4% against 7.7% estimated earlier.This comes as global growth is set to pick up pace and China expands faster at 6.8%, marginally ahead of India.

India is set to regain the tag of the fastest-growing major economy in FY19 with China forecast to grow at 6.5%.

India's GDP growth slumped to a three-year low of 5.7% in the June quarter, triggering downgrades in estimates for the full fiscal year. The World Bank expects the economy to slow to 7%, down from 7.2% estimated earlier.

The Reserve Bank of India expects growth in gross value added (GVA, which is adjusted for net indirect taxes to arrive at GDP) to slip to 6.7% in its latest assessment, down from 7.3% estimated earlier.

The IMF expects consumer inflation at 3.8% in FY18, rising to 4.9% in FY19. Under the monetary management framework, RBI has to target 4% consumer inflation, staying within a band of two percentage points on either side of that. The IMF also expects the current account balance to worsen from -0.7% in FY17 to -1.4% in FY18 and -1.5% in FY19.

It predicts an acceleration in per capita real output growth for India from 5.3% in the current year to 6.8% by FY23.

Key structural reforms will boost growth, the IMF said. GST, which “promises the unification of India's vast domestic market, is among several key structural reforms under implementation that are expected to help push growth above 8% in the medium term,“ the IMF said. It pointed to other critical areas where reform is awaited: “Simplifying and easing labour market regulations and land acquisition procedures are longstanding requirements for improving the business climate.“

The IMF also pointed out that growth doesn't necessarily mean matching gains in income for a majority of the population. “In China and India, for example, where real per capita GDP grew by 9.6% and 4.9% a year, respectively, in 1993­-2007, the median household income is estimated to have grown less -by 7.3% a year in China and only 1.5% a year in India,“ it said.