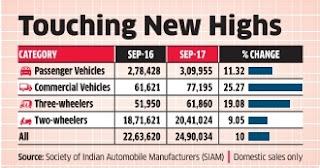 India's commercial vehicles sales in September rose at the fastest pace in nearly six years, suggesting a recovery in the economy. Manufacturers dispatched 77,195 commercial vehicles, 25.27% more from a year earlier, to dealerships in the past month. This is the fastest growth since November 2011, when it was 34.97%. Commercial vehicle sales are often seen as an indicator of economic growth.

However, an 8-10% increase in ownership cost in the MHCV segment, due to higher vehicle prices following the transition to BS IV emission standards, may impact demand to some extent.