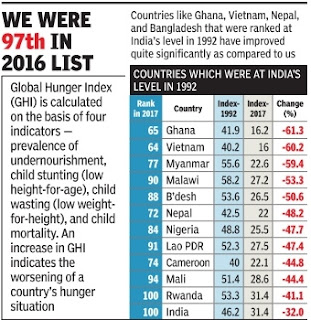 Grappling with a “serious“ hunger problem, India has been ranked 100th among 119 countries on the global hunger index -behind North Korea, Bangladesh and even Iraq. India was ranked 97th last year.

The country's hunger problem is driven by high child malnutrition, and underlines the need for stronger commitment to the social sector, the International Food Policy Research Institute said in its report.“India is ranked 100th out of 119 countries, and has the third highest score in all of Asia -only Afghanistan and Pakistan are ranked worse,“ IFPRI said in a statement. “ At 31.4, India's 2017 Global Hunger Index score is at the high end of the `serious' category , and is one of the main factors pushing South Asia to the category of worst performing region on the GHI this year, followed closely by Africa south of the Sahara,“ it added.

As per the report, India ranks below many of its neighbouring countries such as China (29th rank), Nepal (72), Myanmar (77), Sri Lanka (84) and Bangladesh (88). It is ahead of Pakistan (106) and Afghanistan (107). North Korea ranks 93rd while Iraq is at 78th position. The GHI, now in its 12th year, ranks countries based on four key indicators: undernourishment, child mortality , child wasting and child stunting.

The report ranked 119 countries in the developing world, nearly half of which have `extremely alarming', `alarming' or `serious' hunger levels. “India's high ranking on the GHI again this year brings to the fore the disturbing reality of the country's stubbornly high proportions of malnourished children,“ the statement said.

IFPRI pointed out that more than one-fifth of Indian children under five weigh too little for their height and over a third are too short for their age.