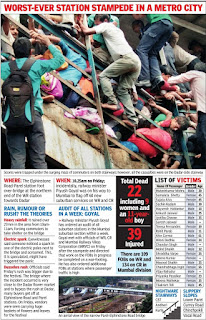 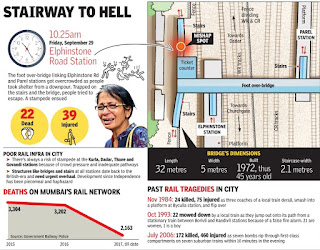 A morning rush-hour tragedy in one of Mumbai's railway stations engulfed the city in grief and focused the spotlight on India's inability to upgrade its creaky railway infrastructure despite a massive annual budget.

A desperate attempt to avoid a sudden burst of heavy rains forced people to crowd together in a narrow, decades-old bridge at Elphinstone railway station in central Mumbai, leading to the death of 22 people and causing injuries to 30.

Nearly 8 million people travel in Mumbai's suburban railway network every day and the stations at Elphinstone and nearby Parel support the thousands of employees who work in swanky high-rises nearby. The Parel and Elphinstone areas house two of India's biggest private sector banks -HDFC and Axis -and hundreds of other private sector offices.

The incident occurred between 10:15 am and 10:30 am, and was sparked by a stampede as hundreds of people tried to access that narrow bridge after alighting from trains. Authorities and police officials say the situation was worsened by rumours as the flood of people trying to reach the road outside became inexorable.

The incident highlights the worst aspects of Indian Railways' infrastructure and the bureaucratic lethargy that prevented a modern foot overbridge from being built at the spot despite being sanctioned by former railway minister Suresh Prabhu. The Railways sanctioned the widening of the foot over-bridge in 2016, but work was held up as the ministry did not want this to clash with other upgradation and repair works planned in the Parel-Elphinstone area. The tenders were uploaded only in September this year, and were to be opened in November.

The incident happened on a day railway minister Piyush Goyal was in Mumbai to attend a ministry function. The function was cancelled and Goyal went straight to KEM Hospital, after landing in the city, to meet the injured. He announced a high-level inquiry into the tragedy. The Railways and the Maharashtra government have separately announced ex-gratia payment of Rs.5 lakh to the next of kin of those killed.

While the Railways may claim that passengers had overcrowded the foot over-bridge, the ministry had ignored numerous warnings by travellers as well as passenger associations that a stampede was waiting to happen. It was suggested that a new bridge be built to connect Parel and Elphinstone railway stations.

The reasons for the stampede vary. Some blame it on rumours of a bridge collapse, others said there was talk of a short circuit. A few others said it was caused by a man slipping on the foot over-bridge.Since the station is used by commuters to interchange between the Western Railway stations of Elphinstone and Parel, it is crowded at most times.

Railway officials claimed a morning downpour could have contributed to the stampede as it forced many office-goers to take shelter inside the four-feet-wide over-bridge.

At around 10.15 am, things started going awry as commuters jostled to exit the station via the bridge and others tried to enter it. Many accounts claim this is when a person reportedly slipped, causing the stampede. Videos shot by commuters showed how bad the situation was, as people climbed on to other's heads to escape.By the time other commuters reached the over-bridge and began pulling out people, it was too late.

Officials in KEM Hospital, where most of the victims were rushed to, said more than 10 people were brought dead. By the evening, the death toll climbed to 22 with at least seven more in a critical condition.

The mood on the final day of Navratra became subdued as news of the Elphinstone Road tragedy arrived. Visuals of victims dressed in festive purple, which was the colour of the day, were doubly traumatic. Dussehra too is expected to be a quiet affair on Saturday. In Dombivli, Shiv Sena MP Shreekant Shinde who had organized the biggest Ras Rang garba cancelled the event.

The Ramlila Prachar Samiti in Malad as well as the Ramleela of Azad Maidan both offered condolences to the families of the departed souls. The Ruparel garba of Falguni Pathak in Borivli offered solemn prayer shortly before midnight as the season ended. Kora Kendra did likewise around 10 pm. Durga Puja pandals like AamPrabashi in Thane and Probasi ra Prabashi in Thane and Probasi Bengali Samiti, Thakurli, offered a two-minute silent tribute. Maitree Cultural Association in Malad expressed sorrow too. Maitree office-bearers offered a special prayer and wore black ribbons before the sandhya aarti.

The Bangiya Sanskritik Parishad Durga Puja of Kalyan also prayed for the accident victims and their families.