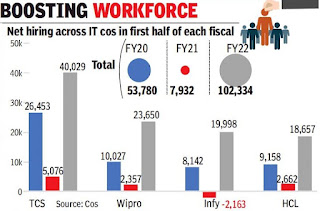 It’s an indication of how much demand has picked up in IT services. Enterprises around the world are trying to digitalise their operations, with the pandemic underscoring how important that is for sustainability. There’s a big movement to cloud because of its ability to scale IT requirements up and down very quickly. That movement to cloud is also opening new opportunities in analytics, AI & in internet of things. Digitalisation has proved a fertile ground for cyber criminals, and that has, in turn, led to massive demand for cyber security.

TCS has said it plans to make offers to 75,000 freshers this year, a record for the company. TCS CEO Rajesh Gopinathan said, “The conviction in technology and the momentum in this is increasing.” He said the cloudbased transformation represents an architecture change in IT. “It’s resulting in a bottom-up rethink as to what is the new architecture and what are the new things that we can do,” he said. Cloud, he said, is also enabling capex to be replaced by opex, allowing enterprises to do a lot more experiments. On the hiring momentum, Gopinathan said the last time TCS saw this was in 2011-12, coming out of the financial crisis.

Last week, Infosys raised its revenue guidance for the year for the second time, an indication of how quickly demand is picking up. The company has increased its fresher hiring target for this year to 45,000, from 35,000 that it had planned three months ago.

Wipro CEO Thierry Delaporte said the demand environment is very strong “and the pipeline, which is the highest in recent quarters, is a reflection of that.”

Gopinathan said TCS had, some years ago, anticipated the need for massive hiring, and so had redesigned the fresher hiring system. The traditional system involved a lot of campus visits. Now, the company conducts a national test that anyone can take. Hiring is based almost entirely on the performance in the test. Not only is this easier, it allows access to a much wider pool of talent.