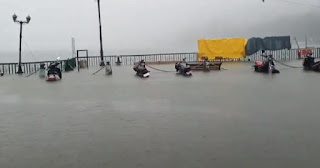 As unprecedented rainfall battered Uttarakhand, drowning houses and people, precipitating floods and washing away bridges, the official death toll climbed to 34 on Tuesday, with the worst-hit district of Nainital recording at least18 casualties.

Several people have been reported missing, sparking concerns that the actual toll is likely to be higher. In fact, information gathered from local officials in each district suggested at least 40 deaths in the state in the past two days.

Nainital additional district magistrate Ashok Joshi said the toll in the district could be as high as 27. “We have received information of many people trapped at multiple locations. Our teams have been sent to all these areas but due to the weather conditions, rescue operations have been very difficult,” he said.

Meanwhile, Prime Minister Narendra Modi spoke with chief minister Pushkar Singh Dhami to take stock of the situation. The Centre has assured Uttarakhand of all required assistance to handle the situation. Later in the day, the chief minister announced an ex-gratia of Rs 4 lakh for the kin of the victims.

Till now we have information about 34 deaths and five people are missing. We will give Rs 4 lakh ex-gratia to the next of kin of the deceased people. A compensation of Rs 1 lakh will be given to owners whose houses have suffered damage,” chief minister Pushkar Singh Dhami said, adding that compensation for loss of cattle would also be doled out.

Several tourists were stranded at various locations around Nainital on Monday, including 100 that were stuck at a resort in Ramnagar. The premises of the resort and its parking lot were flooded after water from the swollen Kosi river entered the property. Many others who had travelled to hotels and homestays in Bhowali, Mukteshwar and Ramgarh for the long weekend were stranded with no power supply or network connectivity.

A tourist stuck in Bhowali along with five others said the area had no electricity for hours. “People are hoarding rations and we are not sure when we will be able to move out. The roads are closed and there is no information on who should be contacted for supply of essentials,” he said.

Electricity supply throughout the Kumaon region was affected with Uttarakhand Power Corporation Limited confirming that six of its sub-stations were submerged. “Our engineers are working but it is difficult. In Champawat as well, power supply has been affected,” said UPCL managing director Deepak Rawat.