Govt To Be Enabler, Not Handler: PM 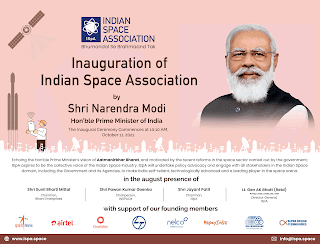 The government’s approach to space reforms is based on four pillars — freedom to the private sector in innovation, the role of government as an enabler, to make youth future-ready, and to see the space sector as a resource for the progress of common man,” Prime Minister Narendra Modi said on Monday, as he launched the Indian Space Association, a premier industry association of space and satellite companies that aspires to be the voice of the country’s space sector.

He also announced the formation of IN-SPACe, which will work as a single window independent agency for all space-related programmes, facilitate private sector participation and speed up their projects.

Announcing that the government is in the last stages of finalising several space-related policies, the PM said: “During the last seven years, space technology has been converted into a tool of last-mile delivery and leakagefree, transparent governance. He cited examples of use of geotagging in housing units for the poor and roads and infrastructure projects.

With advancements made in all aspects of space activity — from satellites to launch vehicles and application to interplanetary missions — India, he said, was among very few countries that has end-to-end capabilities.

“We’ve made efficiency a key aspect of our brand. And as we move from information to space era, we need to enhance this efficiency and promote affordability. As a partner, the government will support industry, young innovators and startups. Now, you need to grow,” he added.

“Today is the day of a new flight for the space sector. Since independence, the Indian government has been synonymous with the space sector and a lot has been achieved by Indian scientists. However, time now demands that Indian talent — whether it is public or private sector — is not restricted by anything. And, in the 75th year of independence, the opening of the space sector provides a new platform for the private sector,” said Modi. Commending the companies for taking his suggestion in December 2020 and forming ISpA, Modi said that only collective effort can take India to new heights.

“India has never seen such a decisive government. The big reforms being introduced in the space sector are indicative of this,” he added.