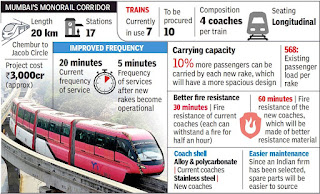 Monorail commuters can expect to get a faster and more comfortable service as the Mumbai Metropolitan Region Development Authority has placed orders for 10 rakes under the Make In India programme. Delivery will begin from January 2023 onwards.

The monorail currently operates with seven rakes, of which two are kept on stand-by, and services are at a frequency of 20 minutes. MMRDA announced that Indian firm Medha Servo Drives Ltd will supply 10 rakes of four cars each for the 20-km Chembur to Jacob Circle corridor.

“With the introduction of 10 more rakes, a headway of five minutes can be achieved. With this headway, there will be a substantial increase in ridership and revenue. Delivery will be over by January 2024,” said metropolitan commissioner SVR Srinivas.

MMRDA said the new rakes will be spacious and have better safety features. Medha Servo will have to design the rake before starting supply.

The weight of each currently operational coach is 13.5 ton. Coaches in the new rakes will be lighter, decreasing load on the guideway and piers, and also faster. The carrying capacity of the coaches will increase too, but the actual number will be known only after the design is approved. A source said, “As against the current capacity of 568 passengers per train, the new coaches will have at least 10% more capacity.”

MMRDA said the cost of maintenance will be lower compared to previous trains due to the Make in India programme. “Spare parts will be easily available in the near future for maintenance purposes. Also, new bogies will be made of stainless steel, just like the Metro,” said an official.

MMRDA had appointed the Larsen & Toubro and Scomi Engineering consortium as contractors for the monorail project in 2008. The system has been plagued with problems as Scomi could not provide adequate rakes, thus hampering the project. The consortium was not able to meet terms of contract and has provided only 10 rolling stock units against a provision of 15 as per the contract. Out of the 10, the contractor cannibalised two (thus making them useless) and one was gutted in a fire in November 2017.

In December 2018, MMRDA terminated the contractor “for failure to perform and fulfil contractual obligations”. MMRDA took over operations of the entire corridor in March 2019.