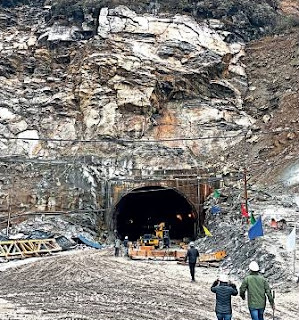 It’s an engineering marvel under way at an altitude of over 13,000-feet in icy cold weather to bolster all-weather connectivity and swifter military deployments to the critical Tawang and Kameng regions of Arunachal Pradesh along the China frontier. The Border Roads Organisation is feverishly working to complete the over Rs 700 crore Sela Tunnel project, which consists of two tunnels and approach roads, before the deadline of August next year.

Announced in the 2018-2019 budget, the longer of the two bi-lane tunnels is 1,555-metre, while the other is 980-metre. The longer tunnel has two tubes, the main one and an “escape” one for emergency use. “We hope to complete the project by June next year. The Sela Tunnel will then become the world’s longest bi-lane road tunnel above the height of 13,000 feet,” said project director Colonel Parikshit Mehra, an M.Tech from IIT Delhi who worked for five years in the construction of the Atal Tunnel at Rohtang.

The existing 317-km long Balipara-Charduar-Tawang road meanders its way through the Sela Pass at an altitude of 13,800-feet on way to Tawang. “The current Sela Pass is visible to the Chinese from the Line of Actual Control. That is militarily disadvantageous for us. The new tunnel will pass under the Sela Pass,” said a senior officer of the Army’s 4 Corps.

Moreover, the BCT road frequently gets blocked at the Sela Pass for both military and civilian traffic during three months in the winters due to heavy snowfall. “It becomes a logistical nightmare and requires massive snow clearance work,” said Col Mehra.

Being constructed using the “latest Austrian tunnelling method”, the Sela Tunnel is much below the snow line, which will allow all weather travel without the challenges of snow clearance.

The tunnel’s overhead clearance is also high enough to allow all military vehicles to pass through it. This will ensure troops and heavy weaponry like artillery guns can be swiftly rushed to Tawang from the 4 Corps headquarters in the plains of Assam to meet any contingency. “The tunnel will cut the travelling distance by only 6-km. But it will ensure all-weather connectivity and cut travelling time by an hour,” said Col Mehra.

Presiding over the “breakthrough blast” of the main tube of the tunnel to mark the end of its excavation through video-conferencing last week, defence minister Rajnath Singh said the Sela Tunnel “will play a crucial role in bolstering national security ” of the region.