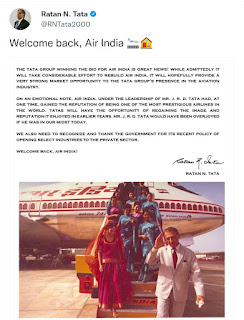 Recently, a story popped up which caught my attention. “Singapore Airlines Pulls Out of Air India bid,” screamed the headline of the story written 20 years ago.

The previous day, another bidder — the billionaire Hinduja brothers — had to withdraw after the law ministry red-flagged their bid, saying they did not meet the strict guidelines for the privatisation process. With SIA pulling out, only the Tatas were left in the fray and the determined efforts mounted by the then disinvestment minister Arun Shourie came crashing down. Years rolled by. The airline continued to pile up debt and services nose-dived.

In May 20I7, the then finance minister Arun Jaitley, while participating on a Doordarshan show titled ‘Teen Saal Modi Sarkar’, revealed the government planned to privatise AI. Jaitley said that in 1999-2000, during his brief stint as disinvestment minister, he had said, “Please disinvest Air India, otherwise there will be nothing left to disinvest.”

Jaitley then went on to say that the government was open to the idea of inducting a strategic partner for AI and that the civil aviation ministry was exploring all possibilities. It was ‘breaking news’, as they say. Soon, the process was started to sell 76% in AI, Air India Express & AISATS. But finally no bidders emerged as investors did not have any appetite for an airline where the government still had some stake left.

Finally, a third attempt to sell AI was launched in 2019. The government made it clear that it wanted to exit the airline 100% and also sweetened the deal to make it attractive for investors. That sums up the more than two decades of twists and turns in the Maharaja’s journey to escape a shutdown.