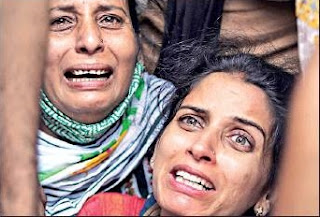 Fresh attacks on minorities in Kashmir in the last few days triggered an exodus by Kashmiri Pandits with scores of families leaving the valley on Friday, a day after the killing of two teachers of a government school – one of them a Kashmiri Pandit and the other a Kashmiri Sikh. Stunned by the fresh targeting of the minority communities by the terrorists – four killings in three days — many other families are preparing to leave the valley in the next few days.

Dozens of Kashmiri Pandit families were seen leaving Sheikhpora, a locality which was exclusively established in the Budgam district in 2003 to bring back and rehabilitate the Pandits. Sharda Devi, who lived with her son and daughter-in-law in the cluster after her son got a job under a special package launched by the Prime Minister in 2015, said they had booked a cab for early Saturday morning, when they plan to quietly leave their home.

Another Kashmiri Pandit said he did not have the courage to step outside the locality after the recent killings. “We are safe inside this colony as it has proper security, but we can’t go outside for work. Some of us have to attend offices and cannot stay indoors all the time like this,” he said, requesting anonymity.

A 51-year-old Kashmiri Pandit, who moved out from Shopian with his family, said, “We had not left the valley even in the worst times in the 1990s but the targeted killing of the minority communities now has forced us to migrate from here.”

An inconsolable Kanta Devi, mother of slain school teacher Deepak Chand, said the government could not ensure security of her son, who had come to Kashmir to earn a living and paid with his life. Kanta Devi had migrated out of the Valley in the 1990s.

Chand’s cousin Vicky Mehra said Kashmir is “hell for us, not heaven”