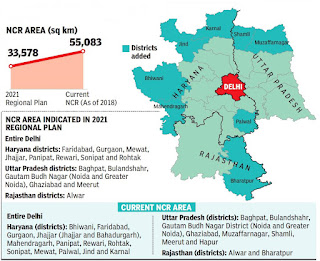 The shape of the National Capital Region may become somewhat like a “palm” if the consensus among four member-states of the region gets formal approval for delineation of the area. It is being proposed that an area with a radius of 100km from Rajghat would become the main NCR while linear towns along the transport nodes such RRTS, Expressways and Highways falling under the current boundary would also come under the region.

“It won’t be a circular area for sure. The aim is to leave the areas falling between the major transport nodes beyond the proposed 100 km radius for other activities such as farming. We have proposed to bring the towns along the transport corridors under the national capital region only to ensure that there is planning and regulated development. There has been over expansion of the NCR in recent years,” said a government official.

Sources said while originally the plan for NCR was to cover an area with radius of around 100 km from the centre of Delhi when the first delineation proposal was made in early 1970s, by 2018 this radius increased to almost 130-140 km.

A comparative analysis of the past and current Regional Plans shows that the NCR area increased by almost 61% between 2011 and 2018 as a substantial portion of Haryana was added to the region. Official documents show that at the beginning of 2021 Regional plan, the total area of Haryana in NCR was 13,413 sq km, but by 2018, this swelled to 25,327 sq km. On the other hand, the addition of areas in Rajasthan and Uttar Pradesh was less. There was no change in the NCT of Delhi as NCR covered the entire national capital.

“The expansion of NCR was less prior to 2011. One of the main reasons why the participating states wanted more areas to be added was to get the Regional Rapid Transit System connectivities and the other interest was to get loan from the NCRPB at low interest rate for infrastructure projects. Now it’s high time we plan for right-sizing the NCR and stop further expansion. The government must finalise the new delineation proposal quickly,” said a source.

He added that there was also a perception that the property prices would increase once an area is notified under the NCR.

An official from the urban affairs ministry said they will incorporate the proposal for fresh delineation in the Draft Regional Plan 2041 and after considering the suggestions and objections, it will take the decision. But some of the planners said that the delineation has to be done through a separate gazette notification.