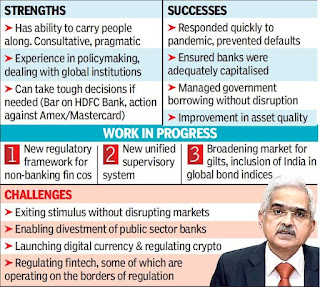 The Centre has reappointed Shaktikanta Das, Reserve Bank of India’s governor since December 2018, for another three-year term to ensure continuity in policy direction as Asia’s third-biggest economy seeks to consolidate a fledgling recovery from pandemic-induced shrinkage.

The decision to reappoint Das, 64, was announced late Thursday after the proposal was approved by the appointments committee of the Cabinet.

Das now has the task of acclimatising the broader economy with normal liquidity flows after it had become used to surplus funds spawned by an accommodative monetary policy. Under Das, RBI prioritised economic growth over immediate inflation management in the aftermath of the pandemic by slashing interest rates and unveiling a generous bond-buying programme — measures in lockstep with those taken by central banks in major industrial economies.

“Under Governor Das, the central bank has done the heavy lifting to support the economy through the Covid crisis, with fiscal policy playing a supportive role,” Barclays said in a note. “We also view the governor’s reappointment as a vote of confidence in the RBI’s policy stance.”

Das’ policy-making will be tested again when central banks in the developed economies, including the US Federal Reserve, start raising rates, putting the rupee under pressure. The rise in global commodity prices, including that of crude oil, would also have an inflationary impact in India, raising the difficulty quotient in policymaking. Das would also have to take a call on the longevity of the current accommodative stance in such a commodity pricing environment, said a senior economist who worked with the RBI. To be sure, India's retail inflation measured by the Consumer Price Index (CPI) eased to a five-month low of 4.35% in September from 5.3% in August as food inflation declined sharply. The index of industrial production for August surged 11.9%.

“We are reaching the shore after sailing through a very turbulent journey, and we cannot afford to rock the boat at this crucial stage. We must ensure that we reach safely to begin the journey beyond the shore,” Das had said at the last monetary policy committee meeting. “In parallel, we remain laser focused to bring back the CPI inflation to 4% over a period of time in a non-disruptive manner.” The central bank believes the Indian economy would expand at 9.5% in FY22—the highest among major economies—after contracting 7.3% last year. Mint Road would now need to check the potential rise in prices as the pace of economic expansion quickens.

“It is felt that continued monetary support is necessary as the economic recovery process—even now—is delicately poised and growth is yet to take firmer roots,” Das had said. Das was economic affairs secretary when Prime Minister Modi had announced the currency-swap programme in November 2016. He took charge as the 25th RBI governor on December 12, 2018, barely a day after his predecessor Patel exited amid a debate over central bank autonomy.