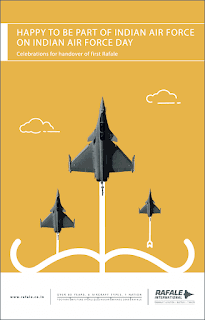 Almost two decades after the IAF demanded new fighters, and a bruising political dogfight over the last couple of years, India has finally received the first omnirole Rafale jet that can outgun and outrun any existing rival from China or Pakistan as well as play a strategic role in delivering nuclear weapons, if required.

“I am told the French word Rafale means ‘gust of wind’ …I am sure the aircraft will live up to its name,” said defence minister Rajnath Singh, who performed ‘Shastra Puja’ on the first Rafale after it was formally handed over to the IAF at Merignac in the Bordeaux region of France, in the presence of his French counterpart Florence Parly.

Rajnath Singh then undertook a sortie in the twin-seat Rafale, which has the tail number “RB-001” to mark the role played by IAF chief Air Chief Marshal R K S Bhadauria in finalising the mega deal.

But don’t pop the bubbly yet. The first four of 36 Rafale fighters under the Rs.59,000-crore deal inked in September 2016 will touch down in India only in May next year after the IAF induction team of pilots, engineers and technicians are trained in France. All 36 jets will arrive by April 2022, with 18 each to be deployed at Ambala and Hasimara for western and eastern fronts.

Moreover, the 13 India-Specific Enhancements or upgrades on the 36 jets to improve tactical superiority in the region, which includes the engine capability to “cold start” from high-altitude regions like Ladakh, will become fully operational only by October 2022 after undergoing “software certification” after all have arrived in India.

But, as Air Chief Marshal Rakesh Kumar Singh Bhadauria reiterated just last week, the twin-engine Rafales will certainly prove to be “game-changers”, along with the Russian S-400 Triumf surface-to-air missile systems also to be delivered to IAF from next year onwards.

With a combat range of 780 km to 1,650 km depending on the mission, the Rafales come armed with a deadly weapons package, advanced avionics, radars and electronic warfare systems to prevent jamming by adversaries and ensure superior survivability in hostile contested airspace.

For one, its Meteor beyond visual range air-to-air missiles, powered by ramjet engines for a range over 120-150 km at Mach 4 speed are arguably the best in the world for air combat. The Sukhoi-30MKI jets scrambled to intercept the incoming Pakistani fighters on February 27, along with Wing Commander Abhinandan Varthaman and others in MiG-21s, found it difficult to engage the F-16s at long ranges.

“Rafales with their Meteor missiles would have knocked down the Pakistani F-16s, which were armed with the AIM-120C advanced medium range air-to-air missiles. If we have to deploy two Sukhois to tackle one F-16, which have 80 to 100-km range missiles, then they will have to deploy two F-16s against each Rafale,” said a senior officer.

The Rafale also has the fire-and-forget Scalp air-to-ground cruise missiles that can hit high-value fortified targets well over 300 km away. Each fighter can carry two Scalp missiles for precision strikes deep inside enemy territory without crossing over into rival airspace. “Pakistan and China do not have any missile in the class of Meteor, or even Scalp,” said the officer.

Equipped largely with Russian-origin fighters, which have low serviceability, India has ensured the Rafales come with spares and costs for 75% fleet availability and “performance-based logistics support” for five years under the overall deal. 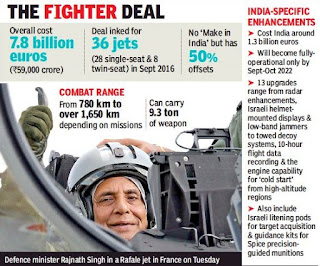