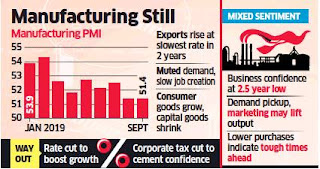 At the same time, business confidence sank to one of the lowest levels seen in over two-and-a-half years amid companies bracing themselves for difficult times ahead, the survey report showed. India’s GDP growth had plunged to a six-year low of 5% in the quarter to June. Slow manufacturing activity was reflected in the contraction in the core sector output for August.

For the quarter ended September, PMI pointed to the joint-weakest quarterly performance since the same period in 2017. Consumer goods producers saw a strong improvement in operating conditions during the quarter, with a modest strengthening evident at intermediate goods makers and contraction in the capital goods segment.

Although total sales rose in September, the pace was among the weakest seen in the current 23-month sequence of uninterrupted expansion, the IHS Markit report said.

New export orders moved closer to stagnation, with September seeing only a fractional upturn in international sales that was the weakest in the current run of growth. Bleak demand conditions, in turn, caused a second successive decline in quantities of purchases among Indian manufacturers. “In light of the weak results for economic growth and muted inflationary pressures signalled by the PMI data, we expect to see further monetary easing in the months ahead,” de Lima said.

The Reserve Bank of India is expected to cut its key policy rate by 25 basis points, following the 110 basis points cut already announced in 2019 so far.