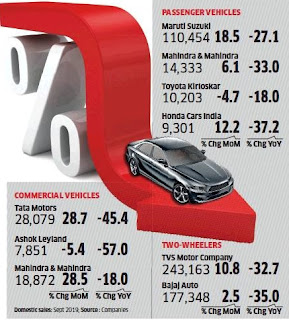 Shradh is a two-week period in the Hindu calendar when people usually put off any big-ticket purchases such as houses or automobiles.

According to industry estimates, passenger vehicle sales fell by around 24% to 223,000 units in September. However, good monsoons and increased liquidity in the market helped the industry fare better in wholesale volumes sequentially, which rose by around 13% over August 2019.

Industry numbers were, however, spoilt by market leader Maruti Suzuki which posted a drop in domestic sales by 27.1% to 110,454 units in September. Over August, the company’s volumes rose by 18.5% to cross the one-lakh mark last month.

Hyundai Motor sold 40,705 units in the domestic market last month, which is a decline of 14.8% over the year-ago period.

Tata Motors said the company continued to focus on retail sales to trim its inventory.