India gets its first excess monsoon in 25 years 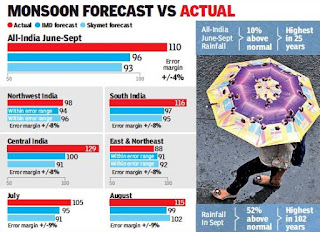 India experienced its first excess monsoon in 25 years, with the season officially ending on Monday with a countrywide rain surplus of 10% on the back of a once-in-100-years rain surge in September that threw all forecasts off target.

September ended with a staggering 52% higher-than-normal rainfall. This was the wettest September the country has seen since 1917 and the second wettest in India Meteorological Department’s records since 1901.

Overall, this was an “excess” monsoon year, which is defined as June-September rainfall at 10% or more above the long period average. The season ended with a countrywide rainfall of 968.3 mm against a normal of 880.6 mm, which is the highest since 1994 — the last time India had an excess monsoon — when 1,001.6 mm was recorded.

The intense rains in September, and in August to a lesser extent, clearly came as a surprise because none of long period forecasts captured it. The IMD had predicted a normal monsoon with seasonal rainfall at 96% of LPA (4% below LPA). The forecast had a 4% error margin on either side. In the event, the monsoon ended 10% higher than the upper end of the forecast.

Private forecaster Skymet was even wider of the mark, having forecast a below-normal monsoon with season’s rainfall pegged at 93% of LPA.

Both IMD and Skymet had correctly forecast a pick-up in monsoon’s performance in the second half of the season (August-September) but came nowhere close to gauging the magnitude of rainfall.

The big gaps between actual rainfall and the forecasts in the regions highlights the extremely hazardous nature of long range monsoon forecasts, which undertakes the scientifically challenging task predicting rainfall over a period of four months.

Pai said what made the difference were the low pressure systems from Bay of Bengal that persisted over the land for a long time, bringing copious amounts of rain. “These are inter-seasonal random events that no seasonal forecast can capture,” Pai added.

Interestingly, this was the first time since 2013 that the monsoon ended up higher than IMD’s forecast.