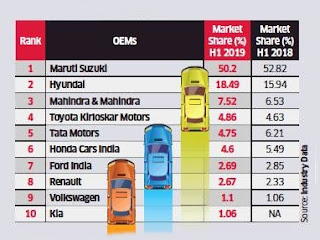 The Indian subsidiary of the Japanese car manufacturer Toyota Kirloskar Motors has overtaken Tata Motors and Honda Cars in India for the first time to become the fourth-largest car manufacturer here in terms of market share.

The maker of premium utility vehicles such as Innova and Fortuner recorded a market share of 4.86% in the first half of the fiscal year 2019 (April to September period), posting an increase of 23 basis points compared with a 4.63% market share in the same period last fiscal year. Competitors such as Tata Motors and Honda Cars India posted a decline of 1.9% and 0.9% in market share, respectively.

The main reason behind the rise in Toyota Kirloskar Motors’ market share is the increased contribution of Glanza in the total sales of the company. Launched in June this year, the re-badged version of Baleno is averaging 2,000 units of sales every month.

Moreover, despite the industry-wide slowdown, the carmaker has been able to maintain average sales of vehicles such as Innova and Fortuner.

Industry experts believe that Glanza has been able to crack the compact hatchback market which Toyota Liva failed to do. Offering Glanza to personal buyers and Liva to fleet operators has turned into a win-win situation for Toyota.

Going forward, Toyota will also get Ertiga MPV, Vitara Brezza compact SUV and the Ciaz sedan from Maruti Suzuki to sell in India.

By 2022, the local unit of Toyota will start making Suzuki cars in its factory at Bidadi on the outskirts of Bengaluru.