What delays justice in lower courts? 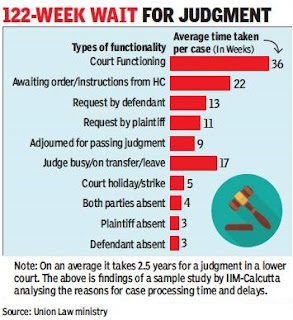 The reason for judicial delay is not so much the high pendency of cases but issues such as judges’ absence, repeated adjournments and the courts refusing to simplify processes, a recent study has found. More than 60% of court time is spent on reasons other than court functioning.

A study by Indian Institute of Management, Calcutta, found that on an average, it took over 122 weeks, or around two-and-a-half years, for a litigant to get a judgment. Only 41% of this time, or 36 weeks, was spent in court functioning, the remaining period was spent in awaiting orders/instructions from the high court (22 weeks) and adjournments for absence of judges because the presiding officer was either busy or on leave or on transfer order (17 weeks).

“There is a huge delay due to the processes of court functioning during the trial stage for reasons namely non-attendance of witnesses, non-appearance of lawyers, lengthy oral arguments, arbitrary adjournments and delayed judgments,” the study said.

Adjournment for even passing judgment took an average nine weeks, while court holidays and strikes consumed about five weeks. Then there were other causes of delay such as the absence of lawyers of both plaintiff and the defendant and quite often, court entertaining requests for postponement due to delay in producing required information.

To understand court processes and re-engineering opportunities to improve court efficiency for justice delivery, the law ministry had last year assigned the study to IIM-Calcutta. Three professors of the institute — R Rajesh Babu, Sumanta Basu and Indranil Bose — analysed 40 randomly picked civil cases of different types from the jurisdiction of 24 South Parganas district court to understand the reasons for delays.

On repeated adjournments, the study found absence of lawyers was often a common factor. “Since advocates have to deal with multiple cases at the same time, they can’t be present everywhere, hence some cases have to be delayed. Lawyers also continue to take long dates so as to cover the tenure of the current judge (the tenure of a judge is for a period of 2-3 years) and present the case afresh to new judge,” it said.

The IIM professors said, “Judicial delay and the access to justice issues have led to affirm the belief that law is the convenience of the powerful. Law and the judicial system must work equally for all sections of society, yet it runs parallel between two different sections of society — one for the rich and the resourceful, and the rest with no or limited resources.”

Delay reduction programmes, however, needed to be checked at micro level rather than providing general prescriptions for major causes of delay, they added. To understand sources of delays, study interviewed litigants and lawyers and found a case usually got only 5-6 dates in a year.