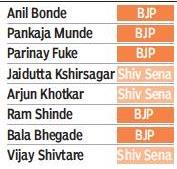 In a major loss of face to chief minister Devendra Fadnavis, eight of his ministers were defeated in the polls. While it was expected that some would lose, the defeat of agriculture minister Anil Bonde was a big surprise as was that of high-profile rural development minister Pankaja Munde.

Daughter of veteran BJP leader, the late Gopinath Munde, she lost to her cousin and arch political rival Dhananjay Munde by a large margin of 31,000 votes.

Ever since Pankaja was inducted into the state cabinet five years ago she was at loggerheads with Dhananjay, the leader of opposition in the council, who had levelled charges of corruption against her. Another notable to bite the dust was Parinay Fuke, the minister of state for forest, and a trusted aide to the ex-chief minister. He lost to Congress candidate Nana Patole from Sakola district by a margin of 15,000 votes.

Employment guarantee minister Jaidutta Kshirsagar, who joined the Shiv Sena on the eve of the assembly elections, was defeated by his nephew Sandeep Kshirsagar from Beed. There was bad blood between the two for a long time. In fact, Sandeep had publicly abused Jaidutta at a public function in Beed district. Senior Shiv Sena leader and minister of state for textiles, Arjun Khotkar, was defeated from Jalna city by Congress’ Kailash Gorantiyal. According to reports, Khotkar’s defeat owed much to the local BJP leaders, who were unhappy that he had taken on the party’s leadership.

Minister for marketing Ram Shinde was defeated by Rohit Pawar, grand-nephew of Sharad Pawar, from Karjat Jamkhed constituency in Ahmednagar district. Though Shinde was confident of victory, Rohit was able to defeat him, as he had established a connect with his constituents in the last three years. Shinde had banked on Rohit losing due to his outsider status.