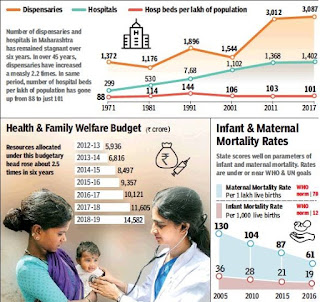 Fewer children die at birth in Maharashtra now than a decade ago. The number of mothers dying during childbirth, too, has reduced to levels lower than what WHO and United Nations have set as a sustainable development goal: 70 deaths per 1 lakh births.

At first glance, Maharashtra — one of the most prosperous states of the country — seems to be healthy. Its free ambulance service almost doubled its output — from ferrying seven lakh patients to hospitals in 2016-17 to 13.45 lakh patients in 2018-19. But health economists and activists say the picture is deceptive, insisting that the state’s performance in the health sector has been lacklustre.

“The last five years tell the story of lost opportunities as far as the health sector is concerned,” said Dr Abhijit More of Jan Swasthya Abhiyan. When the Devendra Fadnavis government announced the appointment of Deepak Sawant as health minister, there was a lot of hope as he is a doctor. “But Dr Sawant did nothing to revive the ailing healthcare system,” said More.

A close look of the state health budget over the years shows that expenditure on health has always been significantly lower than the glowing estimates given during the budget speech. “Health expenditure has been stagnant or even lower than before,” said health economist Ravi Duggal.

The BJP-led state government did little to improve the health infrastructure, which has increasingly been privatised over the years.

In fact, Maharashtra is at the bottom of the list along with Uttar Pradesh and Bihar as far as per-capita health expenditure in 2017-2018 is concerned. Compared to Maharashtra’s spend of Rs.975, UP’s figure is Rs.892 and Bihar’s Rs.898. The national per capita health expenditure is Rs.1,538, while states such as Sikkim and Mizoram spend Rs.5,575 and Rs.4,304, respectively.

Healthcare provided at state hospitals and dispensaries is another matter of concern. “Seventy to eighty percent of posts for super-specialists are vacant and there is a 50% vacancy for doctors,” said Duggal. “Vacancies exist in teaching hospitals as well; so, one wonders what kind of education are they imparting to our budding doctors.”

Even at primary healthcare centres  and at the sub-centre level, there is poor healthcare delivery, say activists. Each sub-centre gets a budget of Rs.7 lakh per year, but it needs Rs.20 lakh at least. “Maharashtra has one PHC per 30,000,” Duggal said. “But this means that there is a building, but no staff.”