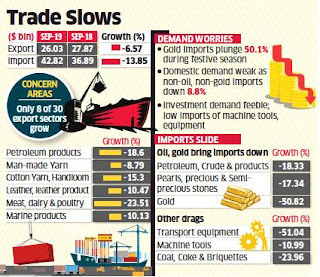 The drop in shipments of petroleum, engineering, leather, chemicals and gems & jewellery made India's exports shrink to $26.03 billion. The trade deficit narrowed to a seven-month low of $10.86 billion from $14.95 billion a year earlier and $13.45 billion in August.