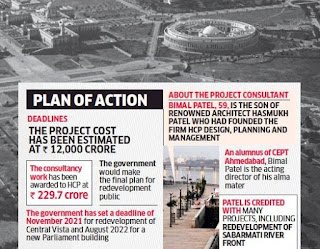 The Centre has awarded the multi-crore project for development and redevelopment of Parliament building, Common Central Secretariat and Central Vista to Ahmedabad-based HCP Design, headed by Bimal Patel.

Patel is the mastermind behind Sabarmati river front development project, which was awarded and implemented when Narendra Modi was Gujarat’s chief minister. An alumnus of CEPT Ahmedabad, Patel is currently the president and acting director of his alma mater. His work and projects have been conferred with numerous awards. He was bestowed with the Padma Shri Award in 2019.

Announcing the award of consultancy work, minister of housing and urban affairs Hardeep Puri assured that no heritage structure would be demolished in Delhi. Ï assure you that North Block, South Block and Parliament House would remain as they are but their use may change,” he said, adding that new buildings are required to address lack of space for government offices and parliamentarians.

The government has set stringent deadlines for the consultant. HPC would now begin stakeholder consultations. Following this, the tender for Central Vista project would be awarded by May next year. The iconic Central Vista would be redeveloped by November 2021. The next project would be a new Parliament building, which has a deadline of August 2022.

When pointed out that Patel’s HPC had not handled a single heritage project of the scale required in these three ventures, Puri said, “Heritage experts would be brought in when the project is implemented. Domain experts and architects would be hired as associates to implement this project.” The minister said there was no question of touching real heritage of the national capital. “But I would like to take everybody on a guided tour of Shastri Bhawan and Lok Nayak Bhawan and if somebody finds even an inch of old heritage in these buildings, we would give up the redevelopment project,” Puri said. The government pays ₹1,000 crore as rent every year to accommodate its offices and ministries in the limited spaces available.

The government would make the final plan for redevelopment public.