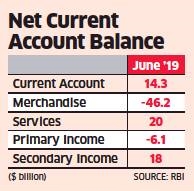 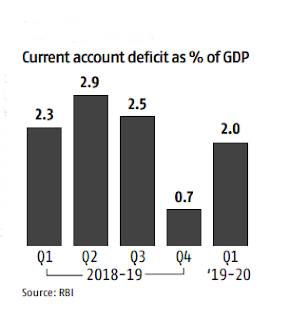 India's current account deficit – or the excess of imports over exports — contracted to 2% of the gross domestic product in the three months to June, paced by higher remittances and services income that helped offset the impact of a wider trade gap.

In the year-ago quarter, CAD was 2.3% of the total output.

In dollar terms, CAD for the quarter amounted to $14.3 billion, compared with $15.8 billion in the year-ago period, according to the preliminary statistics published by the Reserve Bank of India.

Net services inflows increased by 7.3% over June last year, mainly on the back of a rise in net earnings from travel, financial services and telecommunications, computer and information services. Private transfer receipts, which essentially comprise of remittances by overseas Indians to their relatives back home, rose to $19.9 billion, increasing 6.2%.

As a result, CAD narrowed despite higher trade deficit during the quarter at $46.2 billion, compared with $45.8 billion in the year-ago quarter.

The overall balance of payments, comprising current account and capital account flows, ended in a surplus of $14 billion, compared with a deficit of $11.3 billion in the same period a year ago. But India’s foreign exchange reserves rose $17 billion during the quarter on account of valuation gains, compared with a $18.8 billion decline in the same period a year ago, due largely to a valuation loss of $7.5 billion in the 2018 June quarter.