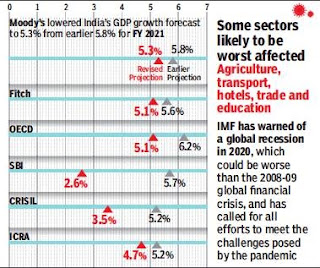 The impact of the coronavirus pandemic and the consequent 21-day countrywide lockdown will slow India’s GDP growth to 2.6% for FY21, the lowest in nearly three decades, according to an estimate released by SBI group chief economic adviser Soumya Kanti Ghosh. Moreover, ratings agency Crisil has also slashed its forecast for next fiscal to 3.5% from the earlier 5.2%.

The total cost of the ongoing lockdown will be at least Rs.8 lakh crore in nominal terms — an income loss of Rs.1.77 lakh crore and a loss in capital income of Rs.1.7 lakh crore, said Ghosh. Estimates showed that, over a 60-year period, global GDP declined only once annually in 2009 by 1.7%. Assuming that global GDP declines at nearly a similar rate in 2020 and, given India’s share in global GDP at 3.5%, it implies a contraction of 2% of real GDP in FY21. This is due to India’s integration with the global economy through trade and social consumption channels, research by the country’s largest lender showed.

“We estimate another 1.7% impact on real GDP because of the 21-day lockdown in FY21, resulting in at least 70% of the economy at a standstill. We thus peg our FY21 GDP estimate at 2.6%, with a clear downward bias, with Q1FY21 GDP numbers witnessing a contraction. FY20 GDP estimates could also see a downward revision from 5% to 4.5% with Q4GDP growth at 2.5%,” the SBI note said.

Crisil said the adverse effects that will follow can dwarf the gains from the sharp drop in crude oil prices. Crisil chief economist Dharmakirti Joshi said, “We have slashed our base-case GDP growth forecast for fiscal 2021 to 3.5% from 5.2% expected earlier. This assumes two things: A normal monsoon, and effect of the pandemic subsiding materially, if not wearing out, in the April-June quarter. The slump in growth will be concentrated in the first half of next fiscal, while the second half should see a mild recovery.”

Several research houses, economists and brokerages have slashed the country’s GDP growth estimates against the backdrop of the Covid-19 outbreak as several sectors of the economy have been hit hard and businesses have come to a grinding halt due to the current 21-day lockdown.