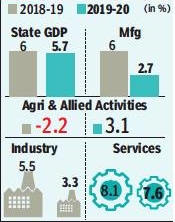 The figures for the past two years clearly indicate a slowdown in the country’s largest state economy, said officials, but the expected growth rate for 2019-20 is still higher than that for all of India, which is estimated at 5%.

The survey report, tabled in the legislative assembly by finance minister Ajit Pawar on Thursday, shows a decline in estimated growth rate for industrial sector from 5.5% to 3.3% and for the service sector from 8.1% to 7.6%. The worst-hit in industry is the manufacturing sector, where growth rate is set to go down from 6% in 2018-19 to just 2.7%. 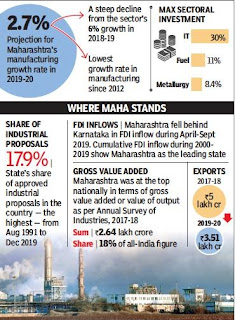 In a reflection of the economic slowdown, Maharashtra’s industrial growth rate is set for a sharp decline in the current financial year. The worst hit sector is manufacturing, despite it being a focus of the Make in India campaign. The latest economic survey for Maharashtra estimates that the sector’s growth would decline to just 2.7% in 2019-20 from 6% in 2018-19.

This will be the lowest manufacturing growth rate of one of the country’s most industrialised states in eight years — Maharashtra’s average for the sector was 7.7% between 2012 (the base year) and 2018.

Nationally, Maharashtra has the highest share of approved industrial proposals, accounting for 17.9% from August 1991 to December 2019. Gujarat, in comparison, has a share of 12.5%. However, actual investment generated by proposals was higher in Gujarat, with a 14% share, compared to Maharashtra’s 10.3%. The economic survey also shows that Maharashtra has a 44% rate of conversion for project approvals. From August 1991 to December 2019, 20,501 industrial proposals with an investment of Rs.13 lakh crore were received, of which, 9,099 projects were commissioned.

The survey shows a slide in the state’s FDI inflows for 2019-20. Figures for April-September 2019 show Maharashtra falling behind Karnataka, though it had done better than its neighbour from 2017-19 onwards.