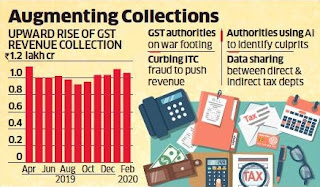 Goods and services tax collections for February stood at ₹1.05 lakh crore, falling short of the ₹1.15 lakh crore target set by the government but grossing 8% more than the revenue collection for the same month last year.

It was the fourth consecutive month when GST collections crossed ₹1 lakh crore.

The GST cess stood at ₹8,947 crore, including ₹1,040 crore collected on imports.

The total number of GSTR 3B Returns filed for the month of January up to February 29, 2020 was 8.3 million.

The Central Board of Indirect Taxes and Customs has been on a war footing to augment collections by reducing input tax credit fraud. Field formations of GST authorities have been asked to focus on identifying fraudulent ITC claims while weeding out miscreants that may use fake invoices or inflated or fake e-way bills. Recently, several thousands of notices have been issued by authorities asking companies to reverse ITC which has been wrongfully claimed.

Tax authorities has also been mandated to use data analytics to check mismatch of supply and purchase invoices, mismatch in return filings, over invoicing, excess refunds availed, patching the tax leakages, fake or huge ITC claims, and refunds under inverted duty structure.

Experts said the consecutive collections of ₹1 lakh crore was an encouraging sign for the economy, and expected collections to stabilise at this level going forward.