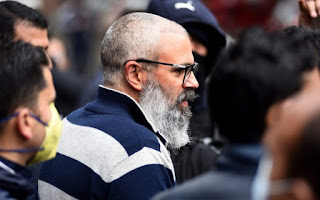 Former Chief Minister and top National Conference leader Omar Abdullah on Tuesday walked in the footsteps of his father, Dr Farooq Abdullah, stating that the Government of India must release all prisoners detained on August 5, 2019, irrespective of their party affiliations. He also demanded that 4G internet services should be restored, especially so that J&K’s people learn how to fight COVID-19.

Omar’s mom and sister met him at a makeshift detention centre in Srinagar, as the administration revoked his detention under the Public Safety Act after almost eight months. At his Gupkar residence, Omar spoke to reporters saying that as far as Article 370 and 35 A are concerned, he will speak on the issues openly and in detail later. “At present, I will speak about how we can get rid of COVID-19. We are fighting a big fight against this coronavirus. Today, we were asked to maintain social distancing, but here we are together violating the same orders,” he said.

Omar, who has grown his beard out long, like his father did not speak about the revocation of Article 370, instead demanding the release of all political leaders, including PDP chief Mehbooba Mufti.

“All those arrested or detained prior to August 5 last year should be released. Those who don’t even belong to any party should also be released. The Centre must also restore 4G services forthwith so that people access sites and learn how to fight COVID-19,” he said.

The leader further said, “During these months, students were left without schools. Our businesses, shopkeepers, hotels and all other establishments bore the brunt. I was locked at only one place but the problems faced by the people of J&K during that period can’t be compensated.”

The order of revocation for him came less than a week after the Supreme Court asked the GoI to inform if it is planning to release Omar from detention. It was on February 10 that Omar’s sister Sara Abdullah Pilot had moved the top court, challenging his detention under PSA.

NC provincial president Devender Singh Rana welcomed the release and described it a step in right direction. “It is a defining moment that will go a long way in further strengthening democracy and initiating genuine political activities in J&K,” he said.

Rana also expressed the hope that this would lead to the release of all other political leaders, against whom there are no criminal charges. “This is imperative for generating an atmosphere of trust and creating conducive conditions to resume healthy political discourse in the larger interest of the people,” he added.

Hailing Abdullah’s release, the National Conference leadership has asked for immediate release of party general secretary Ali Mohammad Sagar, who is also detained under the PSA. They also demanded the release of all political leaders, who are under house detention, including provincial president Nasir Aslam Wani, Chowdhary Ramzaan, Mohammad Shafi Uri, AR Rather, Aga Syed Ruhullah, Shameema Firdous and others.

In his first tweet since August 5 last year, Omar wrote: “232 days after my detention today, I finally left Hari Niwas. It’s a very different world today to the one that existed on August 5, 2019.”

The tweet was an instant hit on the social media platform, collecting 5,000 likes and over 1,000 retweets in the first 15 minutes.

While PDP president Mehbooba Mufti’s daughter Iltija Mufti on Tuesday welcomed Abdullah’s release, she pointed out that her mother is still under detention under PSA, and said for all its talk of women power and women emancipation, the Centre seems to fear women the most.

“Glad he will be released. For all their talk of nari Shakti & women emancipation, seems like this regime fears women the most (sic),” Iltija wrote on Mehbooba Mufti’s Twitter handle. She has been tweeting from her mother’s handle ever since the PDP president and former CM was detained in August 2019.