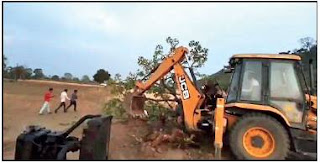 A ‘magical mohua tree’ in Betul district of MP, rumoured to be a cure-all and drawing hundreds looking for miracles, has been uprooted. The district administration says it doesn’t know who toppled it.

The tree stood next to a farm in Seeta Dhana village in Bhainsdehi tehsil, some 250 km from Bhopal. Around a fortnight ago, rumours spread that touching the tree can cure you of any illness, triggering a mad rush like the one that led to law-and-order trouble in Hoshangabad district a few months ago.

Despite attempts by local administration to uproot superstition, the crowd at the tree got bigger by the day. Locals claimed that the tree “emitted electricity”, curing people of diseases. One day, the ‘devotees’ turned up to see the tree upended.

“It was getting worrisome and leading to a law-and-order situation. On March 1, I visited the spot and advised people to be calm. I also discussed with the farmer in whose field the tree stood. He too was worried (by the crowds) and said the tree could lead him to lose his farm,” Bhainsdehi subdivisional magistrate Radheyshyam Baghel said, adding: “We also advised locals that if they want to worship, barriers should be erected and we will also deploy police.” The tree was apparently uprooted later that day.

“It was the next day that I came to know that the tree has been uprooted. A probe has been ordered.

“There are some trees for which permission is required from higher level, and some trees like ‘mohua’ can be cut with permission from the local tehsildar. If the farm owner got it uprooted, we will see if he took permission. If anyone is found guilty, then appropriate action will be taken,” Baghel said.