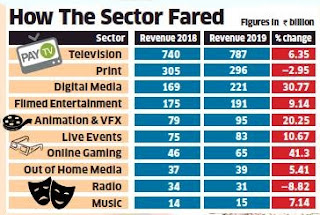 The Indian media and entertainment industry grew by a modest 9% in 2019 to reach ₹1.82 lakh crore, the latest FICCI-EY report on the sector showed.

While the economy felt effects of a slowdown in the second half of 2019, the M&E sector continued to outpace India. Interestingly, advertising grew at just 5.3%, despite sector growth of 9%, demonstrating the relative power of subscription-based business models and India.

Advertising growth was muted due to overall economic slowdown in the second half of calendar 2019 which also impacted festive ad spending and that resulted in a polarisation of spends towards high-impact properties including the Indian Premier League, ICC World Cup and the general elections.

Traditional media like television (6.35%), filmed entertainment (9.14%), Out of home media (5.41%) and music (7.14%) witnessed single digit growth, reflecting the overall sluggishness in the economy, whereas online gaming continued to be the fastest growing segment (41%) on the back of transaction-based games (mainly fantasy sports), and a 31% growth in overall online gamers during the year.

Print and radio were the only two sectors which saw a drop in overall revenues.

Radio segment clocked a 7.5% decline in revenues on sluggish ad spends from retail advertisers in the second half of 2019.

Interestingly, digital subscription also grew over 100% in 2019 as sports and quality video content went behind pay wall and telcos paid more to bundle content with their data packs.

Last year, EY had forecast that Indian M&E industry will reach ₹2 trillion by 2021. However, due to Coronavirus outbreak, EY said that it will update the 2020 estimates once it is in a position to quantify the impact of the pandemic.