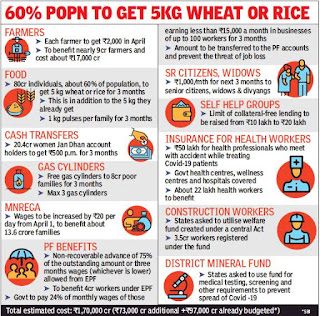 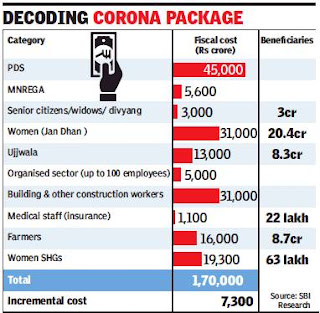 The government has announced a Rs.1.7 lakh crore stimulus that included free food grain and cooking gas to the poor for three months, and cash doles to women and poor senior citizens as it looked to ease the economic impact of the nationwide lockdown.

While over 80 crore poor ration card holders will each get 5 kg of wheat or rice and one kg of preferred pulses free of cost every month for the next three months, 20.4 crore women having Jan Dhan bank accounts would get one-time cash help of Rs.1,500 spread over three months.

Over 8.3 crore poor women, who were handed out free cooking gas connections since 2016, will get free LPG refills for the next three months, while poor senior citizens, widows and disabled will get an ex-gratia cash of Rs.1,000.

The package is being announced within 36 hours of the 21-day nationwide lockdown announced by the Prime Minister to protect the nation’s 130 crore people from the fast spreading coronavirus.

The package included advancing the payment of one-third of the Rs.6,000 a year pre-2019 general election cash dole scheme for farmers, government contributions to retirement funds for the next three months of small companies with 90 per cent of staff earning less than Rs.15,000, and a Rs.50 lakh insurance cover to healthcare workers.

For rural workers, the daily wage under the MNREGA employment guarantee programme has been increased to Rs.202 from Rs.182, benefiting 5 crore workers of about Rs.2,000 in all. India joins countries -- from the US to Singapore -- that have pledged spending to contain the economic fallout of the pandemic that has infected almost 5 lakh people globally and left over 21,000 dead.

The pandemic has infected 649 persons in India and has killed 13 so far. While the free food grains and pulses would cost Rs.45,000 crore, Rs.2,000 payment to 8.7 crore farmers under Pradhan Mantri Garib Kalyan Yojana will cost Rs.16,000 crore. The cash to women Jan Dhan account holders will cost Rs.31,000 crore and another Rs.13,000 crore is estimated to be the expenditure for providing free cooking gas.

The revised fiscal deficit - the gap between revenue and expenditure - has been put at 3.8 per cent of the GDP in the current fiscal. For the fiscal starting April, the government is targeting a 3.5 per cent fiscal deficit.

With businesses closed during the lockdown, the government will contribute employees as well as employer’s contribution to the provident fund for the next three months of companies with up to 100 employees with 90 per cent earning not more than Rs.15,000. The contribution will be a total of 24 per cent of eligible wages. Also, workers will be allowed to draw a non-refundable advance of 75 per cent from credit in provident fund account or three months salary, whichever is lower.