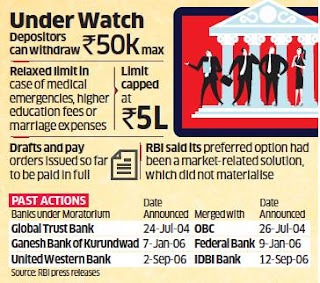 The Reserve Bank of India superseded the board of Yes Bank and imposed a month-long moratorium, it said in an announcement late on Thursday. It expects to arrive at a credible restructuring plan in the next few days.

“The Reserve Bank assures the depositors of the bank that their interests will be fully protected and there is no need to panic,” it said in a statement. This is the first time the central bank has taken such drastic action with respect to a big bank since July 2004 when the regulator got state-run Oriental Bank of Commerce to take over Global Trust Bank to rescue the private sector lender.

The RBI action follows the lender’s inability to raise funds that would have helped it provide against loan losses. Prashant Kumar, former deputy managing director at State Bank of India, will be the administrator of Yes Bank, RBI said.

Depositors will be restricted to a maximum withdrawal of ₹50,000 even if they have multiple accounts, a government gazette notification said. RBI will relax the withdrawal limit to up to ₹5 lakh in the case of some emergencies.

In the event of medical emergencies, higher education fees or marriage expenses a depositor will be allowed to withdraw up to ₹5 lakh. Drafts and pay orders issued so far will be paid in full, RBI said. “In the absence of a credible revival plan, and in public interest and the interest of the bank’s depositors, (the RBI) had no alternative but to apply to the central government for imposing a moratorium,” the central bank said.

“The Reserve Bank will explore and draw up a scheme in the next few days for the bank’s reconstruction or amalgamation and with the approval of the central government, put the same in place well before the period of moratorium of 30 days ends so that the depositors are not put to hardship for a long period of time.”

The central bank said its preferred option had been a market-related solution. “Since a bank and market-led revival is a preferred option over a regulatory restructuring, the Reserve Bank made all efforts to facilitate such a process and gave adequate opportunity to the bank’s management to draw up a credible revival plan, which did not materialise,” the RBI said. “In the meantime, the bank was facing regular outflow of liquidity.’’ The central bank blamed lax governance standards at Yes Bank over the past few years.

“The financial position of Yes Bank Ltd has undergone a steady decline largely due to inability of the bank to raise capital to address potential loan losses and resultant downgrades, triggering invocation of bond covenants by investors, and withdrawal of deposits,” said the RBI. “The bank has also experienced serious governance issues and practices in the recent years which have led to steady decline of the bank.”

Yes Bank will be allowed to repay loans or advances granted against government securities or other securities to the bank by the RBI or by any other bank and remaining unpaid as of Thursday. It would also be allowed to operate its account with the RBI.

The lender, which has seen its fortunes slide over the past 18 months, has been in talks with equity investors over the past year, but had failed to come up with a concrete investment plan.

“The bank management had indicated to the Reserve Bank that it was in talks with various investors and they were likely to be successful,’’ said the RBI statement. “The bank was also engaged with a few private equity firms for exploring opportunities to infuse capital. These investors did hold discussions with senior officials of RBI but for various reasons eventually did not infuse any capital.”

The lender turned wobbly due to surging bad loans and management uncertainty when the RBI declined to extend the term of founder Rana Kapoor as chief executive in 2018. Under his successor Ravneet Gill, the bank managed to raise one round of funds through share sales to institutional investors, but that didn’t prove to be enough.