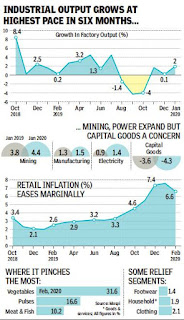 Retail inflation eased to a three-month low in February on the back of moderating vegetable and food prices, while industrial output growth rebounded to its highest since July in January led by mining and electricity sectors, but the overall numbers remained sluggish.

Economists said the RBI is likely to cut rates in line with other global central banks to lift growth against the relentless onslaught of the coronavirus outbreak, which has heaped misery on global financial markets and economies across the world.

Separate data released by the NSO showed the index of industrial production rose an annual 2% in January, higher than the upwardly revised 0.1% in December and above the 1.6% recorded in the same month in the previous year. While there were some signs of improvement, the overall numbers displayed weakness in the sector with the capital goods segment, seen as gauge of investment, contracting 4.3% during the month compared to a decline of 3.6% in the year earlier period.

Of 23 industry groups in the manufacturing sector, 11 grew in January compared to the corresponding month of the previous year.