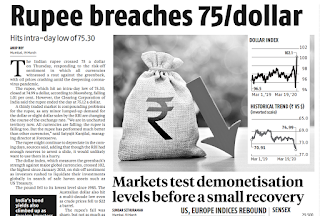 The Indian Rupee fell to a record low joining other currencies as investors fled to the safety of US dollar, but the slide is at a slower pace than peers reflecting the strength of the reserves buffer and likely reversal in India’s fortunes as rock bottom oil prices cushion the external shock unlike in the past.

The currency fell 1.02% to 74.99, recovering from its worst ever levels of Rs 75.31 during the day as portfolio investors sold both stocks and bonds amid fears that the Coronovirus spread could lead to even a depression in the US. The British Pound fell to its lowest since 1985. Bank of America economists forecast the US second-quarter gross domestic product to shrink 12%.

But this time appears to be different for India.

Usually, the Rupee falls as India is vulnerable to oil price shocks as it imports more than two-thirds of its requirements. In 2020, crude prices have more than halved as Russia and Saudi Arabia flood the market amid collapse in demand.

All the G-10 currencies tumbled with even the Japanese Yen falling 1.4% to the dollar. The Bloomberg Dollar Spot index gained 1.1% to record highs.

In 2017, when crude prices rose by nearly 50% in 2017, the rupee weakened by over 3% despite capital flows. Conversely, the rupee is expected to strengthen when oil prices fall.

India’s foreign exchange reserves are at a record $487 billion and the Reserve Bank of India has ensured sufficient liquidity in the market by conducting USD – INR swap. It has pledged to do as much as the market requires.

Global financial markets dislocation often led to a sharp fall in the currency in previous occasions – either during the taper tantrum of 2013 or the Global Financial Crisis in 2008.

During those times India’s external position was weak with the current account deficit at more than 3% of the gross domestic product. For the December quarter it was at 0.2%. In the March quarter, India may even turn current account surplus signaling a strong balance sheet.

But given the extent of turmoil in the markets with foreign portfolio investors pulling out close to $9 billion so far, the rupee has performed much better than many other global currencies, according to IFA Global Research. 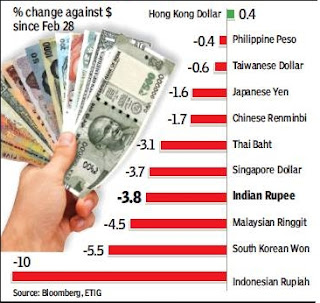