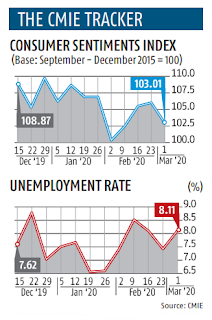 India's unemployment rate rose to 7.78 per cent in February, the highest since October 2019, and up from 7.16 per cent in January, according to data released by the Centre for Monitoring Indian Economy, reflecting the impact of a slowdown in the economy.

India's economy expanded at its slowest pace in more than six years in the last three months of 2019, with analysts predicting further deceleration as the global coronavirus outbreak stifles growth in Asia's third largest economy. In rural areas, the unemployment rate increased to 7.37 per cent in February from 5.97 per cent in the previous month, while in urban areas, it fell to 8.65 per cent from 9.70 per cent, the data released by CMIE, a Mumbai-based private think-tank showed. 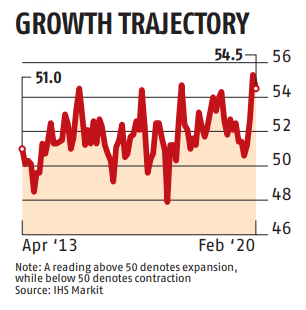 Meanwhile, the country's manufacturing sector activity eased in February from a near eight-year high in the previous month and business sentiment took a hit amid impact of coronavirus outbreak on exports and supply chains, a monthly survey said on Monday. At 54.5 in February, the headline seasonally adjusted IHS Markit India Manufacturing Purchasing Managers' Index held close to January's near eight-year high of 55.3, signalling improvement in operating conditions across the sector. This is the 31st consecutive month that the manufacturing PMI has remained above the 50-point mark. In PMI parlance, a print above 50 means expansion, while a score below that denotes contraction.

The strong manufacturing sector expansion seen at the start of the year was maintained in February, with rates of growth for factory orders, exports and output holding close to January's highs. While firms were willing to step up input buying, hiring activity increased only fractionally.